We were delighted to be back at Red Rooster again this year. Not only is it one of our favourite festivals but it also kicks off our festival season. It also helps that its site is one of the most picturesque venues on the circuit and it must be the friendliest festival around.

The band that kicked things off for us was the Worry Dolls. We’re not sure where their name comes from, but there’s clearly no need for them to have any worries. They deliver a set full of easy listening songs with a pleasant feel that provides the perfect gentle start to the festival. They have a confident stage manner given their youthful appearance.

Joanna Serrat keeps the country feel going but adds a little bit more of a rocking feel. With a bigger band sound, there is more of a warmth to her tunes. It gives it a more modern feel – although that’s modern in a Fleetwood Mac way!

In contrast, over at the Little Red Rooster stage we get the more simple set up of Banjo Jen which is just her, a

banjo and a double bass player. She play straight forward country ditties on subjects such as whiskey and love. We may not be fans of the banjo, but the songs are well received by the crowd sitting in the sunshine.

Back over on the main stage, Kasheen Sampson is creating a far more sultry sound in comparison to the previous acts. The songs have a darker, blusier sound which match the dim blue lighting in the tent. The fact she is from Nashville will not have come as too much of a surprise to the people listening to her set. 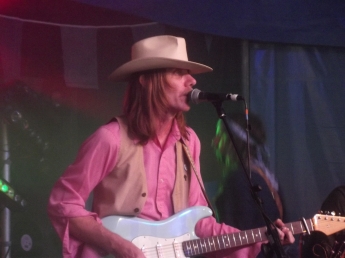 Speaking of a band’s sound matching their home town, it’s appropriate that Gospel Beach hail from L.A. They bring a welcome change of pace with a more psychedelic rock style. They’re the first band to pick up the pace and deliver music to really get the crowd moving. They certainly get everyone prepared for the rest of the night’s entertainment. Yola Carter brings a far smoother sound and one hell of a voice. As the night draws in, she’s a great accompaniment to your evening drink. Her style fits the festival but also adds a darker and more soulful vibe.

That’s all quite a contrast to the headliner Pokey Lafarge, who offers up a far more basic sound. It’s like a skip back to simpler times. A basic rock n roll feel with hints of country and Americana. His set is lapped up by the crowd and there are obviously lots of people who have attended the festival to specifically see him. For us, however, the real end of the night party takes place at the Howling Woods Venue. That’s another tent where DJs play throughout the day. The late night session saw a stunning selection of great old school soul and northern soul tracks. There’s a fantastic atmosphere and the punters are kept drinking and dancing in to the early hours. 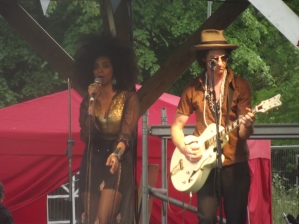 After an alcohol induced lie in, we arise to experience something that had been missing from the first day..some sleazier rock n roll/blues in the shape of Amani and Captain Future. This features members of The Future Shape Of Sound (who’s new album we’ll be featuring soon). It’s a stripped down sound compared to that band and they also warn us that they’ve had to tone down their set given the presence of children at the festival. They’re a great combination of a soul queen playing with a Johnny Thunders esque cool guitarist. Their sound is low down and dirty, which is just how we like it, and far more up our street than some of the more ‘wholesome’ country delivered by some of the other acts. The addition of a saxophone brings in a funkier feel and it all winds up being the perfect way to get us out of our early afternoon slumber.

The rock quota then goes through the roof with Thee Scarecrows. Now, the idea of a country psychobilly band dressed up in scarecrow outfits and wearing hessian sack masks may not appeal. But take our word for it, they are brilliant. A rain storm sees a rush inside the tent but it’s the entertainment that the band offer that keeps people in there. There’s a real county punk feel to the band and they have a great line in on stage banter. They also possess two drummers (a la Adam & The Ants) which makes for a real attention grabber.  They get the whole crowd jumping and will have won many new fans. 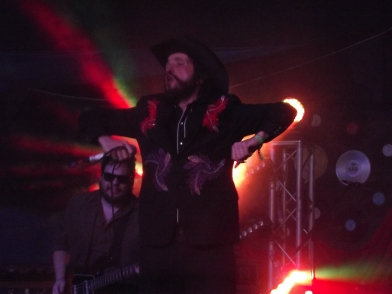 The great thing about Red Rooster is that it always throws up something unexpectedly awesome… this year that honour was undisputedly taken by Los Chicos. They were without doubt the highlight of the festival. Imagine a Spanish country version of the New York Dolls or alternatively dig out your copy of releases by The Flaming Sideburns. Los Chicos delivered the best rock n roll live set we have seen in a very long time. They have the ultimate front man who is full of high kicks and tent poll climbing. The band themselves are a bundle of fun and really engage with the crowd. Sharing their drinks and jumping into the crowd throughout the set, they’re clearly intent on having and delivering a good time. As for the tunes… this band have some of the best garage rock around and deliver a party sound that is as awesome as The Star Spangles. They deservedly get the biggest reaction of the weekend, with loads of cries for more (which sadly was not allowed). Our reaction when we exited the tent was quite simple… they were fucking awesome and the best band we have seen in a very long time.

That was a tough act for Daddy Long Legs to follow. To their credit they also attracted a huge crowd. Their sound was dirty, raw, rock n roll. It’s music at its most primal which will appeal to followers of Jim Jones in his various incarnations. The set is full of rock n roll music driven by the combination of guitars, drum and harmonica. They set everything up nicely for the final headliner Eli ‘Paper Boy’ Reed. You can’t accuse Red Rooster of doing things by half as he is supported by a 10 piece brass band who bring a huge soulful sound to his songs. Eli himself arrives on crutches having hurt his leg the previous night, but proves himself to be a real pro. It would be easy for his voice to be overpowered by the brass band but it actually helps it to shine. It’s a rich and soulful voice which is a magnificent instrument in itself. As a headliner, he perfectly demonstrates what makes Red Rooster so great, it’s a style which may not be mainstream but is just great music with the aim of making sure people have a good time.

If you want a massive festival, splayed out over a huge area with well-known bands and overpriced beer and food, then this won’t be the one for you. If, however, you want to hear some new acts, discover some great music, relax and have a drink in a fun environment then you need to make sure you don’t miss it next year. It was a sell out this year so get your ticket early and make sure you don’t miss out. The festival only gets slightly bigger each year but it never disappoints.