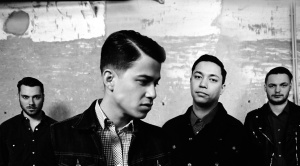 The Road Home are one of those bands that are destined to establish a huge and loyal following. When we heard their “Too Cold” EP, it made them one of the best bands we have heard in years. They have a sound similar to The Gaslight Anthem, it pulls off the difficult job of being emotional and rocking but also melodic. We spoke to the band about their influences and their plans for the future.

Ok, can you give us a bit of general back ground on the band i.e when and how you formed?

We formed in 2011 in Enschede, The Netherlands. Luke initially started the band to have something to do after his old band had broken up around that time. We started playing a few local shows. At first it was nothing serious really, just playing gigs here and there for the fun of it. We had a bunch of originals and for the rest we’d play covers by Springsteen, Social Distortion, Cheap Trick and The Gaslight Anthem.

We got great reactions at the shows and after a while we decided to take things more seriously.
The attitude changed into “we’re going to put everything we have into this or not do it at all”. It just seemed like a waste to only be playing around our hometown every now and then for the fun of it. We wanted to put in the work and get out there. See where it’d take us. By the end of 2011 we decided to record a few songs and it just grew from there to the point where we are now.

Who does the band consist of? 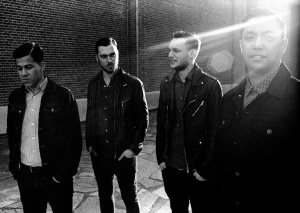 What about the name, where did that come from?

The name was inspired by a John Fogerty + Creedence Clearwater Revival album called “The Long Road Home”. You just take out “Long” and oh well, there you go.

How would you describe the band to someone who hasn’t heard any of your stuff?

I think that the people over at swnk.org made a pretty good description calling us “four guys from Enschede with a hardcore attitude and a mainstream sound taking over the world step by step”.

We do pride ourselves in the fact that we work really hard to make things happen and put everything we have into The Road Home. We definitely have the punkrock/hardcore DIY work ethics going on. It’s given us the opportunity to do a lot of great things already for which we are very grateful.

Soundwise we’re a rock band inspired by old timers like Bruce Springsteen, Tom Petty and Elvis Costello as well as modern day bands like The Gaslight Anthem, Against Me! or closer to you, the now sadly defunct band, Sharks. We basically try to write good rock songs with hooks and filled with youthful energy and have punkrock feel to it.

What material have the band released to date?
We released our debut EP in march of 2012 called ‘Old Hearts’ and a little over a year later we released another EP titled ‘Too Cold’.

Who is/are the main song writers in the band and what process do you go through?

Brothers Kenneth & Luke Christoffel are the main songwriters.
We just write about things that we go trough and not try to overthink things too much. We do have certain ideas of how we want The Road Home to sound but try not to stick to that too much in the very early stages of the writing process or when it comes to musical inspiration. We usually lay down basic tracks and then go trough the process of arranging with the whole band during band practise.

I reviewed the “Too Cold” EP (read it here https://thesoulofaclown.com/reviews/q-t/ ) and absolutely loved it. Looking back on it now, how do you feel about it?

First off, thanks again for the wonderful review!
“Too Cold” is a record that we’re proud of and look back on very positively.

When our debut EP ‘Old Hearts’ first came out we were simply blown away by the responses.
We never(!) expected it to do so well so we where kind of surprised. Happily surprised.
Initially we wanted to record a full length album after ‘Old Hearts’ but because we started playing a lot of shows after the EP was released and we wanted to have new material out, at the most a year later to keep momentum, we decided to go for another EP instead which ended up being the ‘Too Cold’ EP. Writing an entire album would just take too long.

In under ten months after ‘Old Hearts’ was released the ‘Too Cold’ EP was already recorded and waiting to be released, which finally happened in June of 2013.

Fortunately the ‘Too Cold’ EP also did very well. We couldn’t be happier really. It was released on colored vinyl and a digipack MCD on Shield Recordings, so the whole package not only sounds but also looks great. We take that very seriously. We’re vinyl collectors ourselves we feel it’s important to be able to offer people a great package as a whole.

Again, we got a lot of very positive reviews and we even got picked up by national radio gaining airplay for the song ‘Teenage Dancer’. At the end of last summer we started touring on the “Too Cold” EP and are still in the middle of that cycle. The record has been out for half a year now. We’re playing the Eurosonic / Noorderslag showcase festival in January and then tour Europe again at the end of February. 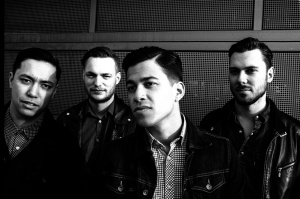 I couldn’t help but see striking similarities to The Gaslight Anthem in the songs. Mainly, this was due to them being punk rock influenced but with anthemic choruses and blue collar lyrics. Do you think this is a fair comparison?

Sure it’s a fair comparison. Truth be told we’re compared to The Gaslight Anthem a lot in the Netherlands, which isn’t strange. We ourselves see the musical comparisons as well and there’s not a lot of bands doing that sound in the Netherlands. We obviously like their music and are inspired by them, as we are by many other (punk rock) bands.

Naturally people (need to) compare new young bands to bands who’ve been around for some time or are wider known so we feel no harm in that. We‘d rather take the comparisons as compliments.

Like I mentioned earlier it’s what we try to do as well; write good rocksongs based on a punkrock foundation with an anthemic feel to it. Lyrically a lot of stuff is autobiographical. But then again I think we have that in common with a lot more bands than just The Gaslight Anthem.

I have hear that Brian Fallon has also spoken positively about the band, is that true and, if so, how does that feel?

I don’t know if it’s true or not, but if so that would be amazing. We’d love to tour with his band someday haha.

Who actually are the band’s main influences?

It’s hard to say. We all listen to different music but do have a lot of common ground.
There’s just too much great music out there to name here but like I said earlier but I think Costello, Petty and Springsteen will always be on our playlists. And then a lot of punkrock bands as well. Lately we’ve been listening to a lot of Ramones, the Replacements, Chuck Ragan and Against Me! and Charles Bradley on the road.

What about current bands? is there any one else that you are really enjoying and liking at the moment?
We’re really looking forward to the new Against Me! and Chuck Ragan records that are coming out soon. We’ve also been listening a lot to the latest Northcote record. And we love the latest Pearl Jam record as well, it’s amazing.

Tell us a bit about playing live, what can we expect from a The Road Home live show?
I think people can expects a straight up pure rockshow, we have no tricks up our sleeves.
We played over 150+ shows in our short existence and there’s nothing we love to do more.

Most importantly, when are we going to get the chance to see you over here in the UK?
Better sooner, than later. We’re trying to get a tour booked there this year, and otherwise most definitely after the full length is out!

In terms of 2014, what can we look forward to from the band? In particular, when will we hear some new material and will it be a full album?

We are in fact now in the process of writing our debut album which we hope to have out late 2014. Other than that we’re still touring on the ‘Too Cold’ EP. We’re touring Europe from February 21 – March 09. For more dates and info head over to http://www.theroadhome.nl.

The Road Home are truly one of those bands that you need to get in to now, before they become huge. It is really great to see a band that are able to deliver music with such passion. Let’s hope we get to hear the album really soon and also see the band playing here in the UK.

All photos courtesy of Erik Luchtenberg