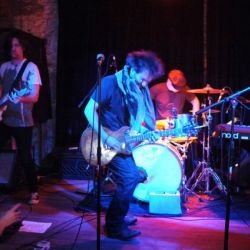 The Cringe are a relatively new band to us here in the UK but have actually been around for some time. This is their first tour in the UK supporting the over the top and absurd Steel Panther (who admittedly, are still funny). The tour also coincides with the UK release of their awesome new album, “Hiding In Plain Sight”.

The band hit the stage to what is probably an inquisitive, but enthusiastic crowd. They are probably none the wiser who The Cringe are, or just confused why they aren’t wearing spandex! However, the band immediately get the large crowd onside with the huge drum sound which kicks off the opening song “Finally Gonna Be On Your Own”. It’s a hell of a song too, with a great power pop/rock sound which immediately has you recalling Cheap Trick. The band don’t hang around and move on to the equally catchy “Fade Out”.

The Cringe may lack the visual razzmatazz of headliners Steel Panther, but they make up for it in terms of energy and musicianship. This is certainly evident on “Gravity” which provides a great opportunity for guitarist Roto to demonstrate his ability to ‘shred’ as well as any metal guitarist. Whilst The Cringe’s sound may be a tad too sophisticated for the crowd, on “String You Along” they not only wow them with a great guitar solo, but also some wonderful dual vocals.

They continue to win the crowd over with the opening “Oi Oi” shouts on “In God”,which the band expertly lead in to a cover of Sabbath’s” Paranoid”. Not only is this always a great crowd pleaser, it is also a good illustration of the diverse influences of The Cringe. Whilst there may be a pop/rock sound, the band can hit it out as hard as any metal band (in fact harder than some of the glam metal bands that the headliners ape).

The short set is just full of melodic, rocking songs, such as “On & On” and “Ride”. Whilst they are all unfamiliar to the crowd, they still attract a surprisingly enthusiastic response. It is certainly warranted, as they are all really well crafted songs. The set ends with another cover, the classic Jailbreak by Thin Lizzy. The Cringe have classic rock roots and just to prove the point, the lead singer JC spends a large portion of the song crowd surfing.

It was probably a brave move of The Cringe to accept this tour as they must surely have been uncertain how the crowd would react. It demonstrates, however, a confidence in both their songs and ability. It’s a confidence which is well placed, where good quality, pop rock songs, delivered by expert musicians with fun and enthusiasm, is surely bound to engage any crowd. Having been provided with an advanced copy of their brilliant new album “Hiding In Plain Sight”, it was a shame not to hear more of the tracks from that. However, lets hope that this was just a taster and that we will see the band on a full, headline tour later in the year. It has taken The Cringe a while to get over to the UK, but it has been well worth the wait and let’s hope we see a lot more of them very soon!