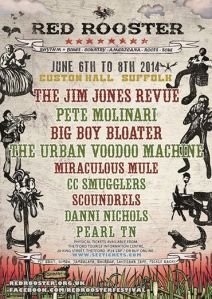 There has been a huge rise in the number of festivals over recent years and it therefore raises the question if anyone can do anything new. Thankfully, James Brennan has done exactly that with Red Rooster. He’s doing something quite unique by bringing a bit of the American Deep South over here to Blighty. Importantly, for a festival, he has gathered some brilliant bands to play but also added a bit more with some great accompanying food and drink. We got the chance to catch up with organiser James to find out a bit more of the origins of the festival and what is going on:

What is the inspiration behind Red Rooster?

My heart has always been in Rhythm and Blues, it’s what I got brought up on really. There are a lot of opportunities for it in the States, but in the UK, gigs for these types of acts are limited. I started a stage at Secret Garden Party called The Crossroads about 5 years ago, to create a platform for these acts – It’s a huge success at that festival and there is definitely a great following to the scene. When I go to festivals I tend to stick around individual stages to watch the genres of music I’m into, so I thought why not create a festival where it was ALL the genres of music I wanted to see. The quality of musicianship in these genres is some of the best, so to create a festival that is so particular about music was the real inspiration behind it, that and music that fans can actually dance to!

Why does the sound, taste and feel of the American Deep South appeal so much?

It’s got to be the atmosphere. There are few places in the world where the sights and especially the sounds and smells capture what I think, life should all be about. Good people, good food and great music.

Can you give us some details on the bands that will be playing?

Well to start, there’s The Jim Jones Revue, who are just a freight train of rock n roll to the brain. Pete Molinari who is the closest we’ve come to, dare i say it, Dylan, in a long time – who’s fanbase has Bruce Springsteen amongst em’, which can’t be too bad! Big Boy Bloater who is starting to become one of the big hitters on the scene. CC Smugglers, a young rag time country outfit who are a massive breath of fresh air to the UK scene. Plus a new band called Scoundrels, who’s last record you can close your eyes and you could swear it was the Stones. Plus much more on the bill.. It’s a great variety of talent.

It is quite a coup to get The Jim Jones Revue to play, it must have been great to secure such a brilliant band for the festival?
Yeah it’s the perfect band to headline. I’ve done a few shows with The Jim Jones Revue over the last number of years and they never stop impressing, they’re just going from strength to strength. It’s great to see them on huge TV shows like The Late Show with David Letterman and Later with Jools Holland. Rupert Orton, their guitarist is a big supporter of the festival and is up on the estate with the Duke of Grafton, jamming in his dining room from time to time, so it’s great to have a family of “like-minds” if you will, involved in the festival.

Of the lesser known bands, which one would be your tip to definitely see?

Miraculous Mule. They’re a psychedelic gospel blues outfit that are on the verge of something pretty special. Managed by the same team behind CW Stoneking, you know they’re a “one to watch”

Away from the music, what else will be going on?

We’re keeping it small, which will help us grow the event slowly and give it the attention that it’ll need, so it’ll be a show only for up to about 750 people. But other than the music, you can expect fantastic high quality food, and drinks from a bar team that have won awards for their southern cocktails, including designing speciality drinks for Jack Daniels.

Euston Park is one of the most beautiful sites you will ever see, that was designed by Capability Brown, arguably the most famous landscaper of all time. There’ll be some side shows, some fun and games and a great opportunity to have a laid back weekend.

But of course there’s more at Red Rooster with Rural Pastimes on Sunday! It’s a country and game fair, featuring aerobatic displays, vintage and classic car display with over 300 cars, alongside motorcycles, tractors and engines. Heavy Horse shows, jousting displays, craft & food stalls, sheepdog trials, terrier racing, flower shows, the lot! Rural pastimes is through the wall of the Red Rooster site, so anyone attending Red Rooster can enter Rural Pastimes for £9. I say through the wall, as we’re doing the festival in the private gardens of Euston Hall, which on Sunday will have a gate opened onto the rolling parkland, which is where Rural Pastimes is held. 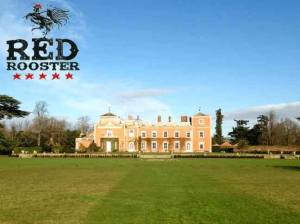 What would you say makes Red Rooster stand out from all the other festivals that are around?

It’s got to be the dedication to specific types of music. I think that so many events now have such a loose music policy, because they are simply trying to attract EVERYONE! But we don’t want to be big. We want to keep small, grow slowly and offer music for the fans of these genres. The sounds of these acts are timeless, so it’s great for people young and old, who just love great music.

Given the food and drink references, what would be your ideal meal, accompanying drink and background music?
A lazy sunny afternoon, listening to Freddie “Cannonball” King, with a pit BBQ smoking in the background and drinking an ice cold St Lawrence – Bourbon and maple syrup shaken up with fresh lemon and Angostura bitters, served on the rocks.

The ticket prices are only £45.90 for adults, which is almost how much you would have to pay to see one big band these days, presumably value for money is very important to you?

Well it’s £42.50 for adults, the extra is just the box office booking fees unfortunately! That’ll include a warm up evening on the Friday night, a whole day and night of live music on Saturday and camping for both nights. It’s then £9 if you want to go to Rural Pastimes on the Sunday. However, you can just attend on the Saturday and camp over that evening for £35.
You’re right though, it can be that pricey to see just one big band at a venue these days! We wanted to make Red Rooster really affordable and to attract the crowd from the offset, not just with the music, but with the financial accessibility to give it a go. As a promoter I want to bring more of these kind of acts to a wider audience. Once gig goers see these kind of acts with this kind of quality of musicianship, they never look back. They really are light years ahead of many contemporary acts when it comes to picking up a guitar! So by making it a decent ticket price, I hope to expose these genres of music to a much wider audience. This is the main thing I want to do with these kinds of bands – helping them to play to much larger audiences which their talents deserve!
Festivals are also starting to become very expensive to attend now, many are about the same price as going to Europe for the week, when you take travel, tents, food and drink into account! So we hope to break that mould and bring shows that are bit lighter on the pocket!

Kids are also free, do you see this as being a family friendly event?

Yes I think it’s essential to have a family friendly festival in order to bring a nice, relaxed and fun atmosphere. We’re not a “kids” event like a camp bestival or anything, nor will we have bouncy castles and sand pits, but we’ll offer fun that all the family can enjoy, young and old – especially those that are young at heart, just like me!

First it was the perfect site. Euston Hall is not only the perfect looking site, but it’s accessibility to so many areas of the country made it the only choice for us. We wanted to make it easy to travel to, wherever you are in the country. The Duke of Grafton is also mad about Rhythm and Blues, so having an estate owner who is as much involved in the event as we are was vital.

Secondly, it was the music. We’re very particular about our lineup and only the best acts will make it onto the bill. There are so many more acts we wanted to have join us this year, but for year one, slots are limited, so we are looking forward to growing, adding more stages and welcoming more talent to our bill.

As a new festival, what are your hopes and ambitions for Red Rooster?

Year one, is to get this show off the ground, that’s always the most difficult thing to do as a promoter. We’ve had some great support and we’re really looking forward to the show in June. From then onwards, our ambitions for it are to add more stages, more bands and create a temporary “deep south esque” town in the heart of Suffolk, attracting fans from around the country who have a love as big as ours for Rhythm & Blues, Americana, Country, Soul and Roots music.

Final question, any chance you can guarantee us some of that Deep South sunshine?!?
“Scientists” ahem, recently stated that Britain has a 75% chance of having the hottest Summer on record. So there you go, it’s pretty much guaranteed!

All of this should be more than enough to whet your appetite in more ways than one. The first thing you should be doing is heading over to the website http://www.redrooster.org.uk/ to not only check out what is going on, but also to make sure you get yourself some tickets. Once you’ve done that, why don’t you make sure you get a posse of you together so we can really make sure Red Rooster is a touch of the wild west here in the UK.