Below are links to some interviews from the past:

If you haven’t heard of the Ruen Brothers yet, it is a pretty sure bet that by the middle of 2014 you will have. The brothers are Scunthorpe siblings Henry and Rupert Stansall, and having released some great singles, performed at some major festivals and had a load of positive press coverage, they are well placed to really explode next year. Paul Hastings took the opportunity to chat with the band, and find out a bit more about how they have emerged with such a great live presence:

PAUL: I’ve read that your Dad sang with The Sex Pistols after Johnny Rotten left, is this true? Is that where your love of music comes from?

RUEN BROTHERS: When Johnny Rotten left, the Sex Pistols still had an album to finish for Virgin/EMI. They were actually auditioning for people to sing on ‘The Great Rock ‘n’ Roll Swindle’. My dad went and ‘knocked on Malcolm McClaren’s door’ as he tells it and asked to audition. He went back the next day and got the gig along with ‘Tenpole Tudor’ and two other guys. He was actually going to do an album with Sid Viscous, but Sid died before this could happen.

Dad has always been really supportive, taking us to gigs when we couldn’t drive, brought us up on an array of the best music ever written and encouraged us along the way! He’s our biggest critic haha. So yes I suppose he’s accountable for our love of music!
For the full interview go to:
http://www.mudkiss.com/ruenbrothersinterview.htm 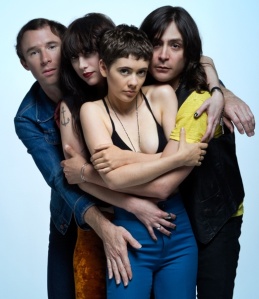 Those Darlins are a fantastic band who have just released their excellent third album, ‘Blur The Line (see our own review here) This is the first album with a new line up and also demonstrates the way the band have evolved from a rowdy young gang to one now capable of delivering a broader sound. Paul Hastings got the opportunity to ask some questions to Jessi Zazu, including asking about that naked album cover photo!

PAUL: As I mentioned in my review, lots of the songs seem to have a more ‘restrained’ feel. There is a sense of pent up intensity, is this something you would agree with?

JESSI: Yeah I’d say as opposed to our previous younger years where we were more like gasoline sprayed everywhere and light on fire, we now have put that gasoline in an engine. Same intensity, just contained and driven.
For the full interview go to:
http://www.mudkiss.com/thosedarlinsinterview2.htm 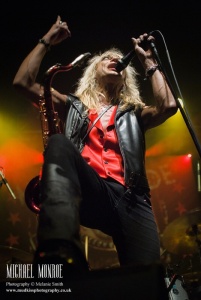 It is something of a tragedy that Michael Monroe isn’t a name that every single rock n roll fan instantly knows. This is despite the fact that he was in band called Hanoi Rocks that really influenced the whole eighties glam/sleaze rock genre. After their tragic demise, he has also released a number of outstanding solo albums and formed another fantastic punk rock band called Demonstration 23. He is still showing no signs of tiring and has in fact released one of his best albums ever, Horns and Haloes. Michael was kind enough to speak to me about the new release and his upcoming UK tour.

PAUL: Having reviewed the new album I absolutely loved it, how would you describe it to someone who is totally new to your music?

MICHAEL: Well, thanks a lot, that’s great to hear. For this album I have got a really special band together and its definitely a band album. In terms of the style, it is straight up rock n roll that is played from the heart. It is pure and simple and just the real deal!<
For the full interview go to:
http://www.mudkiss.com/michealmonroeinterview2.htm

When we heard that the excellent Davis Fetter was releasing another song we knew that we would be in for a treat. It is therefore no surprise to learn that “I Won’t Let This World Break My Heart” is an almost perfect, pop, rock n roll song with a hint of glitter and a retro charm. This is just the last in a fine collection of songs. Paul Hastings therefore grabbed the chance to catch up with Davis to discover more about this unique artist.
PAUL: I first heard about you via a rockabilly website, whilst I can hear traces of that influence I certainly wouldn’t put your music in that genre. How would you describe your style?

DAVIS: Rock & Roll. For me, Rock & Roll is freedom. It’s the only genre of music that has no limits. From Elvis to The Clash to The Smiths to Nick Cave to John Lennon, there’s really no way to categorise what makes music Rock & Roll, but every time you hear it you get the same feeling: euphoria.
For the full interview go to:
http://www.mudkiss.com/davisfetterinterview.htm 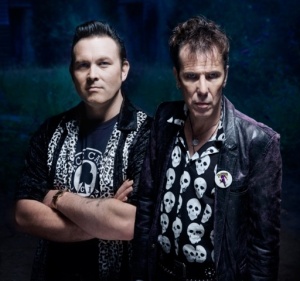 Katmen are a British rockabilly band who were formed in 2007 by Darrel Higham, a hugely respected Rockabilly guitarist (who is now probably now best known for playing in Imelda May’s band, who is also his wife) and Slim Jim Phantom of the legendary Stray Cats. The line up is then completed by Imelda May’s bassist Al Gare. The band have just released a great new CD called “The Kat Men Cometh” which is on the Decca label. They are currently in the middle of a UK tour to promote this release. Fortunately, both Darrel and Jim were able to answer a few questions from Paul Hastings ahead of their gig at the Hare and Hounds in Birmingham.

PAUL: One of my favourite tracks is the first single “We Need Elvis Back”, which suggests we need the king to return to save the music scene, is that really how you feel?

DARREL: I thought my music taste would broaden as I got older but really it hasn’t. I have always loved Rockabilly.In the early 80’s I probably took more notice of pop stuff, I didn’t buy it because there was lots of new Rockabilly bands around. However, I suppose I just stopped listening to it at all. Now it’s a lot more style over substance and is more contrived. It tends to be based on personality because the technology is now there to make virtually anybody sound like they can sing.
For the full interview go to:
http://www.mudkiss.com/katmaninterview.htm

The Boom Boom Booms are a band who are bravely fighting against the multi-format/multi-platform and multi genre internet led music business, by embracing the purity and innocence of rock ‘n roll. Unlike some bands, they are not simply entertaining crowds with a bunch of fifties covers. Instead, they have written, performed and recorded a set of original songs with the verve, energy and jump of that original rock ‘n roll attitude.
Paul Hastings took the opportunity to catch up with singer Gavin Skelhorn to get some more details on the band.
PAUL: What does music mean to you and how important has it been in your life?

GAVIN: Music is the one thing that keeps you going. It’s what drives us for better or for worse. Being full time musicians isn’t always easy but it’s just something inside each of us that fuels the passion to keep going and producing songs. Whatever happens in your life, music is always there and the guitar is always there to channel your energy in to write songs.

For the full interview go to:
http://www.mudkiss.com/boomboomboomsinterview.htm