Wyldlife “Out On Your Block” 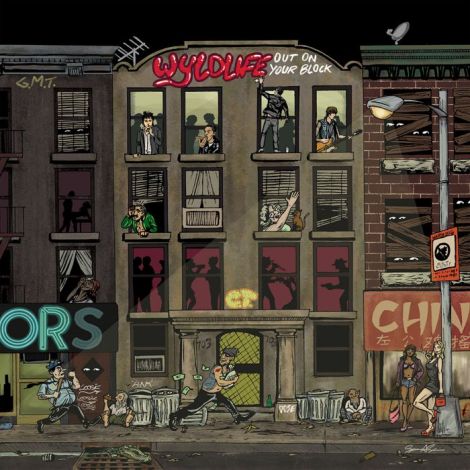 It’s always interesting to see what bands (or their PR teams) put in their bio. We have to say though, that Wyldlife description is one of the best we’ve seen. Anyone up for music that is 70’s styled punk/rock n roll that sounds “Like a leather boot filled with Hawaiian Punch”?

We certainly love an album that opens up in style and first song “Desperate Times” certainly does that. It’s a sweet, sugar rush of glammy punk pop. However, that is just a taster for the sublime power pop of the brilliant “Teenage Heart”. On songs like “Keepsakes” and “Bandita” they show they’re capable of delivering songs that are as catchy as hell. On “120 Minutes” they manage to capture an almost bubble-gum pop/rock sound but manage to do it without making it sound ‘twee’. It’s just music that’s guaranteed to put a smile on your face.

That’s not to say that they don’t know how to rock it out as well. “Deadbeats” is one of the best punk n roll songs we’ve heard since we first discovered the brilliant Beat Angels (a long forgotten band that you really must check out!). Things get a little bit harder on the trashy “Contraband” and “Suburban Fever” which are gutter rock at its finest.

Somehow on “Cuffed” they manage to take a seriously sleazy guitar sound but still sugar coat it with a pop flavouring. That’s before they wrap it all up with the perfect 70’s glam stomp of “Get Loud”.

This album had us reminiscing about some of our favourite bands from days gone by. Brilliant acts like The Beat Angels, D’Generation or The Star Spangles. Like these acts, Wyldlife are able to deliver great pop songs hidden under a sleazy rock n roll sound. It’s a style that ‘serious’ music writers always struggle with, mainly because they’re dull and forget music can just be about having fun and bringing joy. So it’s up to all of us to make sure that Wyldlife don’t become another one of those awesome undiscovered acts.

One response to “Wyldlife “Out On Your Block””