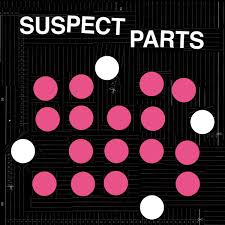 The Suspect Parts are a multi-national band featuring two exiled Americans, one Brit and a German. They’re also a band who are seeking to blend a few musical styles and inspirations. Those sounds are all ones we are fond of and included punk, power pop and the sweetness of 60’s bubble-gum pop.

First track “Alright With Me” is an absolute corker. It’s a perfect blend of indie/alternative rock and power pop. Along with “Madmen With Guns” it’s a reminder of bands like The Replacements but at their lightest and most pop (ie bit like Bash & Pop!).

Things go even further with “Change Your Mind” which is basically a modern version of a Beatles song. Given they were really the first power pop band, it’s no surprise that tracks like “Out Of Place” nod their head to the fab four.

Don’t go thinking this is all sweetness and light though. There’s plenty of punch to songs like “Electrify Me Honey” and “Live Over There”. The Suspect Parts are happy to put the emphasis on the power in power pop when it’s needed.  Forget the rubbish punk/pop of the nineties/noughties, songs like “No-one From Nowhere” and “Overdrive” are the proper mix of pop melodies with a punk style. Whilst “Something To Sing About” recalls the simply awesome Redd Kross, arguably one of the best bands ever to combine punk and pop.

You could call this sound punk/pop, power pop or even Brit pop but it really doesn’t matter. Basically, it’s ten great songs that are built around strong melodies delivered with attitude. Like all good pop albums, the Suspect Parts keep things simple. This is ten songs that are kept short and sharp to create a quick fix of catchy pop rock.