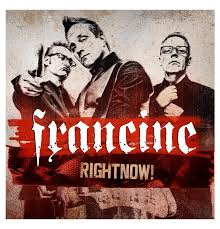 As we remarked when we first reviewed Francine, they are a band which demonstrated some of the good that can come from Spotify. Whilst we first picked them up on a rockabilly compilation, it was clear that they had a sound which wouldn’t be confined to that one genre. That’s something that’s certainly true on this new release.

First song “Can’t Take It No More” is just a massive rock song, full of big guitars and strong melodies. Once again, when we hear songs of the grandeur of “Right Now” and “No Means No” we can only sense that they are built to be played in huge arenas.

That’s not to say that there isn’t still a touch of rockabilly to their sound. Tracks like “Lost Ones” and “On The Edge” have that familiar bass sound rumble. But this is rock n roll with a punk kick. Thankfully, for us at least, it doesn’t get as ferocious as punkabilly, but there’s certainly a dirty punk rock smell to “Mad Animal Shuffle“ and “Fallin’ Down”.

Then you get a track like “Where We Go” which has a surprisingly restrained feel but also a real groove to it. Maybe it’s not a cool reference but it has that laid back cool rock n roll feel of INXS. It’s a similar case with “Lookin’ For Love” which could easily become a soulless cover by someone like Train and turned in to a global hit.

Does it sound derogatory to say that this is just a really strong rock n roll album? Well, it certainly shouldn’t. There seems to be a desire within music to make everything over complicated. In contrast Francine just knock out really great rock songs. This album is like a refreshingly cold beer on a hot day….now who needs anything more than that!!