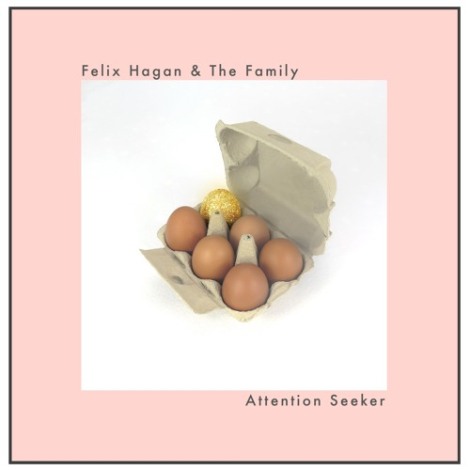 We first came across Felix Hagan & The Family when they supported Frank Turner. If the transition of Frank from punk to singer songwriter to huge star wasn’t shocking enough for the gathered crowd, then Felix Hagan & The Family certainly were! They delivered a somewhat extravagant set. We were therefore eager to see if they could capture that vibrancy in the studio.

“Attention Seeker” is a somewhat gentle introduction to the band. Together with “The Wasted Years” and “Woah There Kenny” they are relatively straight forward rockers, all be it delivered with the kind of showmanship we have seen previously from say Queen or The Darkness.

However, they are soon taking you on a tour of their flamboyant personalities. “Gene Kelly” is as showy and glittery as you would hope given the title. It’s a joyful pop rocker and along with the rocking “Hey I Want You” are the kind of songs that it’s just impossible to listen to without a big smile on your face. “Babe I Ain’t Comin” is then a real curveball, with a kind of rock, disco, samba mix! It’s gloriously over the top. Whilst “Burn Down This City” is like a big Eurovision song contest entry.

Despite all that, the band are still essentially a rock band. They just can’t resist adding a few sparkles, such as the funk on the almost Maroon 5 equalling commerciality of “On The Double”.  The album hits a late peak with the last couple of songs. “Be A Freak” is a great electro pop/rock track. Imagine if the 1975s were really as extravagant and daring as they pretend to be. It’s followed by “Tough To Be A Dreamer”, a glorious pop rocker with a title that probably tells you a lot about the band and their approach.

Christmas is probably the perfect time to listen to this album. You need to put aside your cynicism and any music snobbery. You need to just rejoice in the glitter and indeed slight cheesiness of this release. Just need to relax and enjoy it. There’s enough miserableness in the world (and in lots of music) so take the time to have some punch or egg nog, listen to this and have some fun!