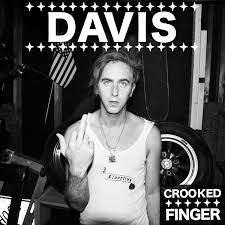 Most keen music fans have an artist or band that they think are destined for greatness. Davis is one of those acts for us. We first found him when we were going through a rockabilly phase and desperately searching for someone delivering that style in a current and relevant fashion. We found that in the sound of Davis Fetter. Now, he goes by the shorter name and has also developed his sound, as shown by the EP and singles he has released more recently. We are also damn excited that, as well as having the opportunity to review his latest releases, we are exclusively showing the video to his awesome latest single “Cold Shoulder”.

The title track “Crooked Finger” opens the EP and it’s a great example of how he has taken that rock n roll style and brought it bang up to date. Along with “Get Mine” it sounds like JD McPherson’s younger, snottier, punk brother. Things go even further on “Touch The Sky” where you get a sound a bit like The Artic Monkeys if they had grown up in the states on a diet of rockabilly. The song “Fuck You” is a real piece of class. Taking a classic fifties sounding ballad and using it to raise a middle finger. In total contrast, “2 Cents” is the same kind of indie/rap/rock style that the awesome Jamie T peddles.

In terms of the singles, “Los Angeles” keeps the Jamie T feeling going, but is a little more laid back. “Hello” is a brilliant modern pop rock song, full of passion but still melodic and damn catchy. The most recent single “Cold Shoulder” is yet another great pop rocker that leaves you thinking surely this one will be the big break through hit. Check out the video below and we are sure you’ll agree.

These releases are a good example of how an artist can grow and develop their sound but not lose sight of their origins. Davis has kept his rock n roll roots so will continue to appeal to his hardcore fans but also hopefully grow that fan base and gain greater commercial success. We’re still desperate for a full album release, but can understand why individual and immediate releases are more beneficial for an independent artist. So, for now, you need to go and check his music out (https://www.facebook.com/unofficialdavis/?fref=ts). Then when he does hit the big time you, like us, will be able to say that you were there first.