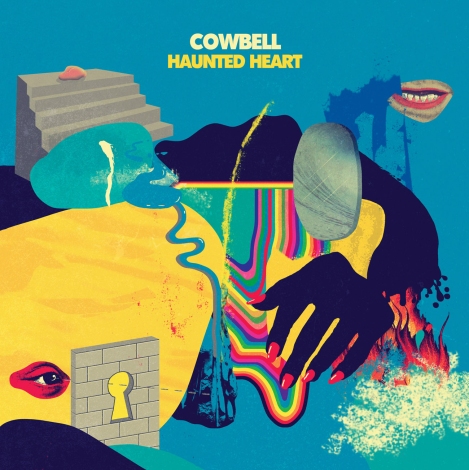 This is the third album from Cowbell, but the first that we have heard. We were certainly enticed by their bio which promised ‘more Memphis, more Fuzz, more greasy foot-beating, party-greeting, soul-treating maximum RnB’. Coupled with references to the likes of The Cramps and the Doors this was definitely a release that we needed to check out.

As the titles of songs like “Haunted Heart” and “Doom Train” may suggest, there is a somewhat dark tone to many of the tracks on this album. There’s definitely a rockabilly feel to the songs but it is with a more voodoo style than plain rock n roll.

That’s not to say there aren’t upbeat tracks on the album. Songs like “None Of Your Business” and “Nothing But Trouble” are made to get you up and dancing. There’s certainly plenty of rocking to be had on the excellent “What Am I Supposed To Do”.

We often mention how rockabilly bands are good at mixing up their vocals between male and female (why don’t more genres do this?!?). Cowbell certainly use that to great effect on this album. They use female lead vocals on “Downlow” and the swing led “New Kinda Love”. The effect of this is to give them an added soul. Then sometimes the female voice provides the backing vocals. The benefits of this are perfectly demonstrated by the brilliant “Neon Blue” which is really lifted by the combined vocal effect.

Indeed, it’s the extra addition of soul in these songs which really makes them stand out against many of their contemporaries. It’s unusual to hear a band of this ilk that is able to deliver a song full of emotion such as “Something’s Gotta Give”. The whole album then ends on a crescendo with the epic balladry of “No Wrong”.

At first we were ‘duped’ into thinking this was just a retro styled rockabilly record. In fact, it offers far more than that. Some albums lend themselves to certain times and this is very much a late night album. Ideally, it should be played on vinyl, listened to in your favourite chair and with a glass of warm red wine to keep you company….now that sounds like a plan!