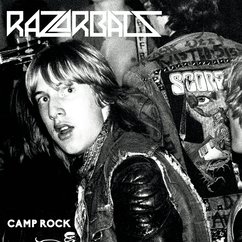 This is the debut album from the Razor Bats and, despite the title of the album, this is not a teeny bopper album. Indeed the cover, with its picture of a startled youth at a gig, surrounded by denim jackets and music patches, tells you a lot. This is very much an old school rock album.

This album opens with a real bang, as you’d expect from a song with the title “Planet Riff”. It’s a huge song that opens up like something from Def Leppard’s Pyromania before adding the glam swagger of Hanoi Rocks and the OTT approach of The Darkness! To be honest, if none of those bands mean anything to you then this is probably not the album for you either.

If, however, you like a bit of rock n roll with a glam kiss, there is plenty to love on this release. Hell, they even have a song called “Kids Of the 70’s”! Although it’s probably a little more Alice Cooper than Slade. There’s actually an eighties, big rock, feel to many of the songs. “Desolation Highway” is a sleazy ballad which recalls the street punk glitter of Hanoi Rocks. Whilst “Soul Shaker” is yet another big rock song.

You would be hard pushed to find a dirtier guitar riff than the one on “Transformer”. This is a band which clearly knows its sleaze rock heritage and they blend the glam with the dirt on songs like “Getaway”, which actually reminds us of Ratt at their peak. However, don’t go thinking this is all throwaway stuff though, songs like “Mess It Up” and “Betty Boop” have plenty of edge to them.

There’s no hiding from the fact that this band have a sound from times gone by. We hope, however, that this is something they continue to embrace.  If this album was released back in the LA hair metal days it would of been huge. It consists of sleazy riffs building to sing along choruses but all delivered with a more sinister Cooper esque sneer. Now, what’s not to like about that!