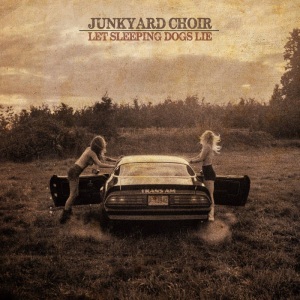 When we heard that Junkyard Choir were another two piece band, if we’re honest, we were tempted to give them a miss. After all, it is becoming a somewhat crowded genre these days. However, our interest was sparked when the Brighton due were described as being “One half Scottish grit, the other half Caribbean spice; one hundred percent dirty south coast blues-grunge explosion”.

The first song “Vaya Con Dios” may have an exotic name, but it is a relatively straightforward, drum beat driven blues rock number. The band soon build on from this to show their real potential. Second song “Get It On” is equally as hard hitting but adds a more upbeat and appealing tone. The album really hits it’s stride with “Oh, Have Mercy” which adds a touch of soul in to the mix. The added organ had us thinking of the great Lucero (although it also has a clip that reminds us of “On A Rope” by Rockets from the Crypt!).

The album continues to run with the awesome blues riff of “Let The Good Times Roll”. A dirty blues, rock n roll song that would be at home on The Door’s LA Woman album. Whilst, “Hold Fast”, sees them adopting a more laid back approach. Likewise “Shake Your Tambourine” has a coolness and swing about it. This sound actually suits them far better than the more aggressive songs on the album.

The band get the balance right on “Rehab” which is built around a huge riff and big drums but perhaps not quite the swagger that is offered by “The Wolf”. They begin the album wind down with the gentle intro and Black Crowe’s sounding southern harmony feel of “Let Your Love Roll”. This, however, is a prelude to the excellent “Sweet Marylou”. We’re not normally a fan of slow songs ending an album but this one really hits the spot. It has a Springsteen, almost bordering on Pearl Jam, atmospheric feel to it.

That’s a key thing about this album, you need to get beyond the simplistic band set up and the more straight forward blues rock tracks. Sure they will appeal to fans of bands like Royal Blood and others reared up on the White Stripes and Led Zeppelin before them. However, there is a far more interesting band behind that bluster which deserves your attention.