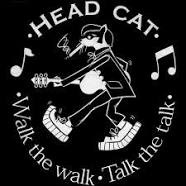 Slim Jim Phantom is a man who just knows how to sniff out a great rockabilly band. Not satisfied with being a member of the legendary Stray Cats, he formed the fantastic Kat Men with Darrel Higham and now he is part of this super group. In Headcat he is joined by Danny B Harvey (Rockats, 13 Cats, Lonesome Spurs),and legend in his own lifetime Lemmy from Motorhead. The band actually give a great description of both their ethos and sound on their own Facebook page. They “have teamed up in a high-energy, take no prisoners combo just to remind the world how Rock’n’Roll is supposed to f*ckin sound. Forget all those rock posers, who have nothing new to say, passing themselves off as the real thing. When it comes to real Rock ‘n’ Roll these three guys have Lived it, Breathed it, Bled it.” Now who would argue with that!

The album begins with one of only two of the songs actually written by the band, “American Beat”. It’s true that it does take some listening to get used to hearing Lemmy belt out classic rockabilly tracks rather than something heavier. This song is actually a great rock n roll song with nice piano and a great drum beat. The other self penned song is “Eagle flies on Friday” which is a classic slow blues number and is a real “whisky in the hand” song. Both these tracks, will build up hopes of perhaps more original material on future releases.

That’s not to criticise the other tracks on the album which show the band have a genuine good ear for a great song. “Bad Boy” sees Lemmy add some of his trade mark growl to a faster paced song and it is just one of a number of driving rockabilly numbers, including “Let It Rock” and “Something Else”.

There are also plenty of opportunities for the other members of the band to demonstrate their undoubted skills and talent. “Say Mamma” may be a straight up rockabilly song but it has a really great guitar solo played by Danny which really drives the song along. They can, however, show more restraint, and on “Trying To Get You” they again add more of a blues feel to the sound. The band really do a good job of keeping the feel slow and laid back.

Performing a Lennon and McCartney is always a brave move, but this band would never be one to shirk a challenge so they have a crack at “You Can’t Do That”. The original song is obviously great but Headcat deliver it in a totally different style. This is not the silky and squeaky clean original song but is instead given an extra sense of grit and danger.

Lemmy’s involvement in this supergroup may come as a surprise and it would be great to know what hard core Motorhead fans think about the album. It emphasises, however, how influential rock n roll or rockabilly remains on so many great musical figures. This isn’t a band straining to cross different musical paths and boundaries. This is an album which sounds like a great group of music lovers getting together and having a rip roaring time. It makes it clear that sometimes there is no need to over complicate things but instead just focus on delivering an album with some short, sharp, rock n roll tunes.