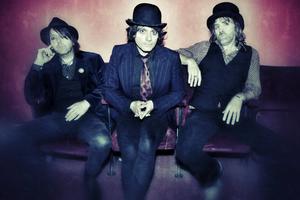 Regular readers will know that we are big fans of The Last Great Dreamers. They’re one of those bands that just haven’t really had the break they deserve. Despite that, it was a great early Christmas present to discover that these glam, power pop dandies were embarking on a short pre Xmas tour.

The band don’t waste any time getting things going with the great power pop of opening number “Primitive Man” and then the brilliant glam n roll of “New Situation”. They’ve now built up a fine collection of songs which means they can go from some of the classics from their debut (e.g. “Only Crime”) right up to the title track of their most recent release “13th Floor Renegades”. That song is just one of the tracks from the album which once again should be bringing the band worldwide acclaim. Although, to be fair, we’d still be happy to hear a set just playing their debut album straight through!

What’s also great is the way that the band deliver the songs, you’d be hard pressed to find a group that have the same level of charisma on stage. It allows them to effortlessly glide from the psychedelic groove of “Sci-Fi Louise” to the glam pop heaven of “Mary Wants” and through to “Broken Things” which has a really relevant and modern sound.
It’s appropriate that they take the time out to pay respect to Pete Shelley of the Buzzcocks. Like that band, The Last Great Dreamers are also able to deliver classic 3 minute pop songs, such as the awesome “Ashtray Eyes” and the glam call to arms of “Oblivion Kids”. That all leads to the band winding the evening up with fans favourite “Last Great Dreamer”. A song which sounds as fresh and fun now as it did on its release all those years ago.

The only disappointment of the night was the relatively small crowd (although to be fair it was an enthusiastic one). If you live anywhere near Birmingham, actually scrap that, if you live in the UK you should be ashamed of yourself for not attending this gig. It was a chance to see a really brilliant live band. We’re convinced that there must a parallel universe where the The Last Great Dreamers are playing to packed out arenas. That’s certainly what the band and their songs deserve.