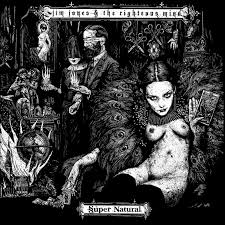 This new release from Mr Jones is aptly titled as he has been a bit of a super natural force in terms of keeping sleazy, blues based, rock n roll alive over recent years. Whilst he has shifted his bands a few times, the emphasis has always been on delivering in your face rock n roll.

Right from opener “Dreams” you know that he has kept up that great form with this new release. Together with “Boil Your Blood” and “Heavy Lounge #1“, this is blustery and powerful rock n roll, full of passion and energy.

There’s also a really sleazy and dirty undertone to many of the songs on this album. “Base Is Loaded” could be the theme tune to a strip that will leave you feeling very dirty after you have watched it! The pace eases off slightly on “Something’s Gonna Get Its Hands On You”, which is like Nick Cave busking with the Stones. It certainly has a stronger sense of melody than the ball breaking sound of “No Fool”.

We may be alone in this, but we can’t listen to “Aldecide” without picturing Matthew McConaughey’s scene stealing moment at the restaurant in Wolf of Wall Street. It’s certainly a suitable reference as that track, along with “Till It’s All Gone”, share the same sense of debauchery as portrayed in that film. Even when things are slowed down on “Shallow Grave”, there is still a sense of menace and a darker tone to the sound.

Given his track record, it is not surprising that Jim Jones has delivered another.  But, actually, this may well be his best release to date. He has kept the raucous style and sound but perhaps supported that with even bigger tunes.  This is dirty rock n roll at its best.