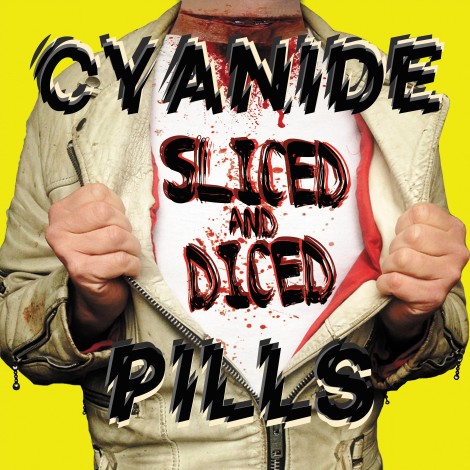 There’s a great sense of old school punk about the Cyanide Pills. Hell, they even describe themselves as ‘a gang of c***s from a desolate land’. Clearly they are a band with a lust for the seedier side of life and this is certainly reflected in their sound.

The album starts in a great, snotty punk style with songs like “I Don’t Remember” and “Stop and Search”. Any body a bit daunted by an 18 track album will be pleased to know that the majority are limited to sub 3 minute explosions (as all punk rock songs should be!). We heard the term ‘yob rock’ used to describe the Sleaford Mobs the other day but actually that’s a far more apt description for songs like “Still Bored” and “Earthlings”.

At this point, we were fooled into thinking this might be ‘just’ a good but rather perfunctory punk rock album. But the album sparks into life with “Laid Off”. A brilliant punk rockabilly song. Then the bold melody of “Big Mistake” really takes you by surprise. More power pop than punk, it’s an absolutely glorious track. It sees a run of songs where the band shows a wider set of influences; “Alone Tonight” (Replacements) and “Government” (T-Rex glam rock).

You’d be really pushed to find better punk songs that remain so urgent sounding but also full of melody like “One Of The Boys” and “Razorblade”. They’re reminders that even the original punk bands, like The Clash and Pistols, still knew a good tune when they heard it. Cyanide Pills take them even further on “Say You Will” and “Waiting (For You To Call Me)” which are just joyful pop punk songs.

Don’t get us wrong though, this is not the wimpy punk pop that US bands were peddling out a few years ago. You know damn well that in a live environment songs like “Took Too Much”, “Pre-emptive Strike” and “In The Back Of a Car” will be delivered with passion and create a sweaty mosh pit.

It’s just great to put on an album that is chock full of punk rock anthems. Equal parts passion and melody. It’s perfect for dancing, drinking, partying and possibly fighting dependant on your mood. It’s great escapism music, no need to think about it, just enjoy it.