Tom Baker and The Snakes “Look Out Tower” 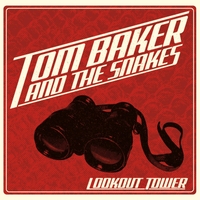 Having recently reviewed the brilliant new album from Tommy Stinson’s Bash & Pop, we were excited to hear comparisons being made between that and this new release from Tom Baker and The Snakes (great name!).  The fact that this album also promises “traces of Mats’, Stones, and Petty, hooks and chorus’ galore” makes it sound very promising indeed!

Regular followers of this site will know that we absolutely love a bit of simple, good old rock n roll. That’s certainly what the opening tracks, “Gotta Find Her” and “Run It Out” offer here. They’re all great melodies, power chords, crunching (and sometimes squealing) guitars. Indeed, “Make It Hurt” even has a bit of a glam metal feel to it. It may not be big or clever but its great fun and we love it!

You’ll be hard pushed to find a better power pop song than the insanely catchy “Doll Eyes” or “Needle In The Red”. These songs offer a more modern twist on the classic Costello technique of delivering spiky pop tunes.

There is more of a ‘hard rock’ sound to these songs, unlike the more ‘wimpy’ tunes that sometimes get falsely badged under power pop. Songs like “Waitin’ For Nothing”, “Bad Change” and “Maybe Come Back To Me” take their cues from great bands like Cheap Trick or Marvelous 3. They’re built on big melodies and choruses but still with crunching rock guitars.

There’s more of a Stones’ slither on “Satisfied Fool” with its blusier tone. Something which also reoccurs on the more ‘countrified’ feel of “Say Goodbye”, a song which has mainstream US radio hit written all over it.

This is one of those albums that you put on when you really just fancy a good time and a few beers (isn’t that always?). If you’ve had a shit day and just want to forget your woes then this is the album to take you away from it all. There’s enough depressing news in the world and that’s when you can’t beat some good old rock n roll.