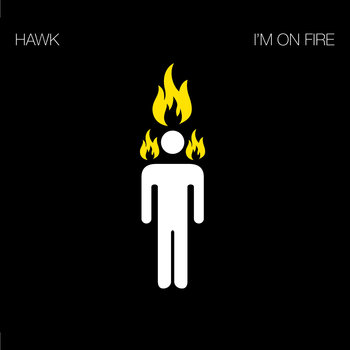 Hawk are actually the new venture for David Hawkins of the band Be. It sees David building on the alt-country sound of his previous band. It’s given a bit of extra thump by adding in a harder garage rock sound. It’s a bigger sound that is seeing comparisons being drawn to The Rolling Stones and even AC/DC.

The first song, “Mother Road” certainly has a big sound, but it’s also a bit funky. The comparison may not be as ‘cool’ but it reminds us of Lenny Kravitz (it’s too often forgotten how good his early stuff was). Things get even better with the double whammy of “I’m On Fire” and “Turn Up The Radio”. These two songs will indeed have you thinking that you’ve accidentally skipped to a classic Stones album.

There’s something unashamedly big and bold about songs like “Enter The Sun” and “You And Me”. Whilst probably crafted in a basement for performances at a low key bar, there’s a sense of vision that befits much bigger venues.

We’re not talking about dumb ass commercial rock though. There’s a greater sense of authenticity about these tracks. Whether we’re talking the Black Crowe’s esque blues of “Topanga” or the classic 70’s American rock of “C’mon Eddie”.

There remains an indie/alternative style behind the big rock sound. So, on a song like “True” there’s a sense of Soul Asylum about it. That’s before we’re back to the Stones again with the strutting “Love Me Too” or the slithering blues of “Higher”.

It’s kind of weird that this album is such a breath of fresh air. In many ways it’s a very ‘traditional’ record in terms of containing classic sounding rock n roll songs with a blues undercurrent. However, there remains an alternative edge to it. Perhaps the freshness just comes from the very fact that it is a straight up rock album, based on songs rather than gimmicks…something that is actually pretty rare these days.