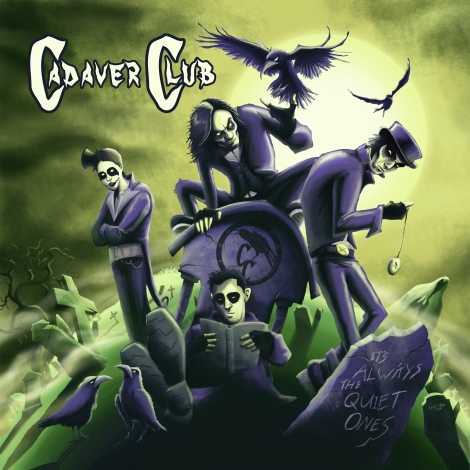 On first glance, this may not be a band we’d be attracted to. Their look is very much influenced by a B Movie Horror style. It’s not necessarily our cup of tea, we love bands in make-up but not necessary the horror vibe. However, Cadaver Club includes the talents of Matty James so we were pretty sure it wouldn’t be just a case of a gimmicky style to paper over any musical cracks.

Any concerns we might’ve had over the horror influence are put to bed immediately with the big opener, “Afraid Of Me’, a great punky rock n roll song. Along with songs like “Penny Dreadful”, there may be a tongue in cheek horror feel to the lyrics, but they’re mainly great rock songs with catchy melodies.

We really like the way that the band take their cues from old school rock n roll on songs like “Transylvania Twist”. Indeed, the album hits a bit of a peak with the brilliant fifties rock n roll sounding “Follow Me to Hell”. Although, that’s matched by the equally excellent “When Your Friends Just Won’t Die” which adds an almost indie rock feel to their gutter sound.

There’s an almost Celtic rock n roll feel to “Southern Cemetery”, which gives it a real ‘drinking song’ vibe. We were particularly enamored with songs like “The Dead Ringers”, “The Quiet Ones” and “Twilight of the Gods”. These are the tracks where they merge a sleazy, dark sound with a pop/punk throwaway style.

The pace is slowed down a bit on “Murder Of Crows”, a song which is probably closest to the solo work of Matty James. Things are soon back to balls out punk rock on “Hellhounds On Your Track”, by which time, we get the feeling of a punk rock band like Green Day but with a sense of fun replacing an obnoxious attitude.

We’re sure that the make-up, image and subject matter will instantly appeal to those who like a sense of drama and showmanship with their music. However, importantly, the quality of the songs shines beyond the image. It’s a great punk rock album that is just great fun to listen to.