The Shondikes “Psychotic Make Out Music” 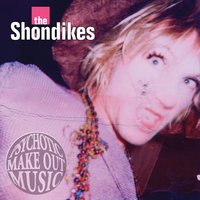 The Shondikes are a band who have come out of nowhere, to us at least. But when we here that their music includes styles like Punk, Pop, Hard Rock, Ultra-Lounge and Doo-Wop; all brimming with insanity, we get a good feeling about them. However, the hook which really got us was their own description of their sound “we play the most beautiful, romantic, completely indecent music you’ve ever danced and fallen in love to”.

Let’s be honest, The Shondikes had us at the title of opening number “Greasy Sex Disco”!! It’s not exactly disco, but it is a great, sleazy, rock n roll, glammy number. Indeed, it’s the first of a number of songs, like “Rock n Roll Sex N Soul” that are just the perfect accompaniment to a glam pop party. Tracks like “Cocaine Sex Slave Glamour Party” (what a title!), are really just cheap and trashy numbers, but also damn good fun.

However, there is also a surprising diversity on the album. After the initial dirty rock, you get the innocent sounding, musically at least, “Catch Me Kiss Me”. That track is a neat sixties influenced pop song. It’s followed by the lizard lounge, almost jazz, styling of “Let Me Groove You”. Well, that’s at least until it merges into a seventies glam rocker!

Songs such as “Wanna Go To The Dance” and “Come On Seduce Me” are based on an almost retro rock n roll sound but sexed up. Imagine the Monkees if they’d spent all their time on coke and hanging out with the New York Dolls!!

Importantly though, the songs aren’t too saccharine, indeed, they can punk it out with the best of them as shown on “Society Girl” and “Vampire Speed”. On the whole, the songs are built on the foundations of power pop. The melodies are key to songs like “Please Don’t Leave Me In The Movies” and “This Could Be Real Love”. It’s just they’re sucked of any innocence and it’s replaced with some gutter glam.

This is one of those albums that you just listen to in amazement and then immediately Google the band to find out more about them. We sense that they may get caught in the ‘cult band’ trap. But, if your taste extends to some dirty, glammy, pop n roll, this may well be your favourite new band!