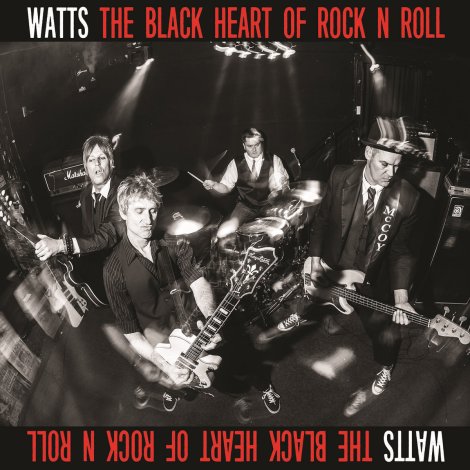 For some reason the moment you hear that the Watts come from Boston, you kind of know that they’re just going to rock. Although, maybe that’s just because we associate that town with the mighty Aerosmith. That’s even before we read the press release and its reference to punk rock sensibility and Stones’ swagger. The fact they also draw inspiration from AC/DC, Cheap Trick and Kiss means this album must be made for us.

The Watts set their stall out immediately with the thundering sound of the first song and title track “Black Heart of Rock N Roll”. It’s a straight up rocker that recalls the classics like AC/DC or The Cult. That’s just the first of many, and it’s refreshing to hear a band just willing to rock out.

There’s a sleazy blues sound to “Up All Night” and when we get to tracks like “Strut (Like A Champ)” and “Stage Fright” we get a swagger that is reminiscent of Rocks era Aerosmith. The pace eases off a bit on “Bye & Bye” which has a laid back beat and more of a cowboy feel to it. It’s a style which is maintained on the Stones sounding “Fast & Loose”.

A particular highlight is “Sunset”, a simple but oh so effective rock n roll number, full of swagger and attitude. The album then rounds off with “Bring On The Lights”. An instant favourite of ours because we’re just a sucker for a cowbell opening!!

The simplicity of this album is really it’s strength. There are just ten excellent rock n roll songs. No messing about, no filler, no gimmicks, just great tracks. It’s a blessing just to have a band willing to deliver some timeless rock n roll sounds. Heck, just take a look at the bands referred to in this review (Rolling Stones, Aerosmith, AC/DC and The Cult), that’s a pretty good template to follow in our book!!