Sego “Once Was Lost Now Just Hanging Around” 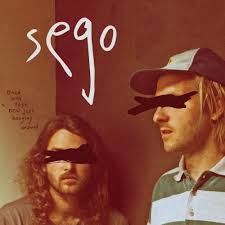 This is the debut album from LA based slacker-indie punk duo Sego. It follows a couple of Eps and has already drawn comparisons to the likes of DFA or LCD Soundsystem. Although their more indie sensibilities also see references to Mellow Gold era Beck or Pavement.

The album opens with the sparse and electronic sound of “Obscene Dream”. Along with “False Currency”, you initially get the feeling that it’s a rather ‘detached’ sound. However, things start to change with the somewhat spikier “20 Years Tall”.

It’s when you reach the simply brilliant “Stars”, that the album really hits its stride. It feels like you are stepping out of the dark and into the bright sunshine. There’s more of a ‘warmth’ to songs like “The Fringe” and the excellent “Fool Around” which have a more indie pop feel to them. Although, in between those songs, “Day Job” and “Micky Macali” suggest that Sego have spent as much time in dance clubs as Indie ones.

It almost feels like the band are growing before your eyes (ears!) as you listen to the album. By the time you get to the likes of “Once Was Lost Now Just Hanging Around” and “Wicket Youth”, you are on to big electro indie songs that could be commercial hits. Indeed, they could easily grasp the coat tails of The 1975. They then bring the album to a close with the psychedelic “Where I Belong” which is all electro indie swing with a, strangely, almost Beatles feel to it.

It’s so great to review an album which is just so varied and actually interesting. It almost feels like it takes you on a journey of experiences. If you just dip your toe in to checking out the odd track, you may be disappointed. Instead, you need to give it the attention it deserves and listen from start to finish (and then start again!).