Jeremy Porter And The Tucos “Above The Sweet Tea Line” 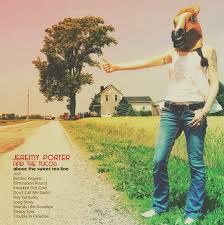 If ever a band intro was written with the purpose of catching our eye, it’s the one for Jeremy Porter And The Tucos. They describe themselves as sounding like “guitars and whisky, hooks and heartache, energy and passion”. Throw in references to Cheap Trick and Husker Du, and we have high expectations for this release.

After that, a song about a pet cat may not sound like the best opening for an album!! Thankfully, “Josh” is a great first song. It’s a laid back rock n roll song with a dash of country/Americana. Together with “Elimination Round”, it introduces us to a band that fans of the likes of Lucero or Marah might like.

That more ‘rootsy’ sound is present on a number of tracks on the album. Something you would probably guess just from the title of “Don’t Call Me Darlin’”, which has a slower beat and is almost a country ballad. Whilst “Hey Kentucky” is a raucous bourbon drinking song.

However, this album also offers a load of diversity. There are strong hints of power pop on many of the tracks. “Knocked Out Cloud” is a great little pop rock number, with a catchy melody. The infectious nature is taken even further by the brilliant “Sounds Like Goodbye”, which is a real, sunny day, driving song. Along with “Loving Strong”, these tracks show a really great ability to deliver songs with a commercial appeal. Although, they are still grounded in an authentic, alternative rock background.

The album then returns to the Americana rock n roll of “Trouble In Paradise”. It’s another song you would love to hear at some kind of dirty cowboy bar (not that we have those over here in the UK…..unfortunately!!).

This is a real gem of an album. It takes influences from bands and genres that we love. What makes it particularly good, is that it’s an album that swerves from those different sounds and influences. Too many bands get caught in delivering one style of sound on an album. The result is that you end up dipping in and out of it. This album is one that keeps you interested from beginning to end. A simple thing, but one that many others struggle to achieve, so hats off to Jeremy Porter And The Tucos.