The Hillbilly Moon Explosion “With Monsters and Gods” 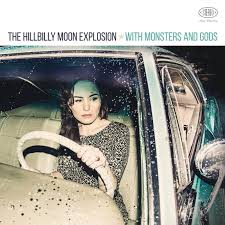 The Hillbilly Moon Explosion are probably best known amongst the Rockabilly and, to some extent, the Psychobilly scenes. On the positive side, this has ensured they have built up a large and hugely devoted fan base. The more negative aspect is that it hasn’t perhaps given them the wider exposure they deserve, especially here in the UK. They have released some brilliant albums, which are basically just great rock n roll albums.

You immediately get the impression that this is going to be another fine addition to their catalogue when you hear “In Space”. It immediately highlights the wonderfully seductive vocals of Emanuela Hutter. It’s a more laid back number but her voice has the soft but wicked style of Debbie Harry (it is therefore not a surprise that they cover “Call Me” a few tracks later). We then get the Latin flavoured “Temptation”, which has you dreaming of more exotic climates.

It’s not until you get to “Depression” that you get a more ‘traditional’ rockabilly sound. There is, however, plenty of rock n roll on the album to keep those fans more than satisfied. Tracks like “Desperation”, “I Love You Better” and “Heartbreak Boogie” have enough slap bass to keep those quiffs shaking!

The key thing about The Hillbilly Moon Explosion though, is the way that they are happy to mix things up. Therefore, “Midnight Blues” is far more of a slow beat, rocking track. Whilst you move in to eerie, horror soundtrack territory on “Black Ghost”, which features Mark Sparky Phillips. It’s a real contrast to the sexy, Latin seduction of “With Monsters and Gods”, with its smoky vocals.

We’re soon back to the upbeat rockabilly style of “You Miss Something”, before they throw in another cover, with a somewhat jaunty version of “Jackson”. We again see Sparky return for this duet. Finally, there is the infectious “Rose Outside”, which uses some great horns to beef up the sound and end the album on a real high.

The Hillbilly Moon Explosion are a really great band. Sure they will really appeal to fans of rockabilly or rock n roll, but they offer a lot of diversity as well. They’re one of the few bands who add a bit of a twist and ensure that their sound remains relevant and contemporary. They never fall in to the trap of being ‘samey’. Like all their other albums, this is just a delight to listen to.