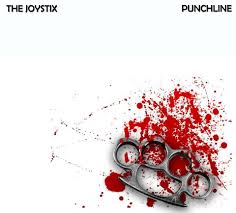 Hungary may not be the first country you think of for sleaze punk rock but that is indeed where The Joystix come from. However, citing a love for some of the classic bands of the genre, including New York Dolls, Dead Boys, The Stooges and our very own The Wildhearts gives a good glimpse as to what to expect from this album.

There’s no building up slowly on this album, it kicks off with the punk driven rock of “Make Love Make Hate”. That song does still have a melodic charm but on the whole, it is clear that The Joystixs mean business. Tracks such as “Disconnected” and “Feel Feel Feel” are fast paced songs, with urgent melodies, delivered with punk rock spirit. They’re aggressive and intensive songs but they haven’t forgotten the need to ensure that an actually good song has to back up the attitude.

There are also some signs of a love for some classic sleaze rock n roll, as shown by the riff that dominates the more throwaway “Born Under A Bad Sign”. Whilst, “Back In The Saddle” isn’t an Aerosmith cover, but does have us recalling the good old glam metal days. This is something that continues with the brilliant “Last Action Hero” and “In My Head”. These are the songs where the band really allow the focus to be on the melody rather than the power.

Similar to a band like The Backyard Babies, the key to the best songs on this album is the ability to balance punk spirit with rock n roll songs. A great example of this is “No Friends”, an excellent song that powers along but is still catchy. “Fame Train” also demonstrates the band’s recognition of the advantage of building up to a chorus which really catches the listener’s attention.

They even have the balls to end the album with a good old rock ballad. “Golden Days” is a brilliant, lighters in the air, melodic rock song. It’s the kind of track that ‘back in the day’ would have been huge and a big MTV favourite.

It comes as no surprise that the band have previously mentioned a love for songs by the likes of Backyard Babies, Warrior Soul and The Wildhearts. Like those bands, these tunes are built on being played with high energy and intensity. Behind the punk spirit, however, you realise that the songs are really just fast paced rock n roll songs. Listening to this album makes you realise that sometimes all you need is a bit of dirty, rock n roll!