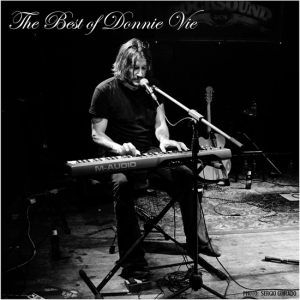 To those in the know, Donnie Vie will be a well known name. For you others, he is or was (not sure anyone knows the official position!) the front man for one of the most criminally underrated bands, Enuff Z’Nuff. A band that were lumped in with the whole Hair Metal scene but actually owed a lot more to The Beatles than Heavy Metal. Following that line of thought, Donnie was always portrayed as the Lennon to Chip Z’Nuff’s McCartney.

That’s a connection which is rammed home on this release, a collection of songs from his various solo albums. Tunes like “Forever” and “My Love” can only be described as Lennon esque. “I’ll Go On” is pure Beatles psychedelia with it’s Asian influences, swirling melody and breathy vocals.

Importantly though, the songs are far from being pastiche. Tracks like “That’s What Love Is” and “Almost Home” are heartfelt, poignant ballads. The melancholy nature of some of the tracks, perhaps, give a glimpse of why Vie’s career has never been as plain sailing as his talent deserves.

We wouldn’t want you thinking it’s all doom and gloom though, there are still plenty of pop gems that will get you smiling. “Flames Of Love” is probably one of the finest pop/rock tracks that you are likely to hear for a long while. It forms a perfect one/two with “I Wont Let You Down” which is just a gorgeous song.

There is also plenty here to really appeal to fans of Enuff Z’Nuff. “Wrapped Around My Finger” is Donnie at his most boisterous and could easily have featured on their “Tweaked” album. Whilst both “Wunderland” and “Now Ya Know” have the similar chugging bass lines and harmonies that we have come to expect and love about his band. There are even three new versions of Enuff Z’Nuff songs at the end of the album. This includes the brilliant “My Dear Dream” which is given a stripping down in to a piano driven number. The album ends with a splendid acoustic version of “Time To Let You Go”, a song that can easily bring a tear to your eye.

This compilation really just shows what a talented guy Donnie Vie is. Hell, this album doesn’t even include our favourite solo track, “Better Days”!! Over the years, he has amassed an incredible volume of solo material that has quietly been released, without the support it deserves. Hopefully, this release can, once again, turn the spotlight on a man who is just a brilliant songwriter.