Craig Finn “Faith In The Future” 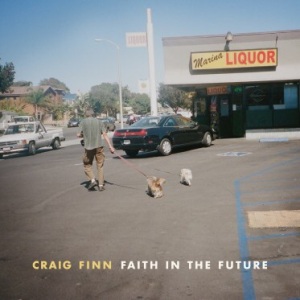 The fact that you’re reading this site probably means you know enough about music to know who Craig Finn is. Just in case you don’t, he’s the lead singer of the brilliant The Hold Steady. His latest release, “Faith In The Future” is actually his second solo album and is clearly a sign of a man who is constantly creating new songs.

As with his work with The Hold Steady, there is no mistaking Craig’s distinctive voice. Although, his fans will have noticed a steady change in his delivery of songs, which has developed from a very ‘spoken voice’ style to a more conventional singing style over the years. “Maggie I’ve Been Searching For Our Son” shows this has been taken further on this solo album. His voice is more laid back than before and the lyrics delivered in a less volatile fashion. This is also reflected in the musical style of many of the songs on this release. They have a mellower sound and on “Roman Guitars” (despite the title) it is led by a brass sound rather than guitars and “Sarah, Calling From A Hotel” has a sparse, country ballad, sound which is very ‘Springsteen’. Hell, “Going To A Show” has an almost bossa nova beat to it!

One thing which hasn’t changed, is the storytelling style of the lyrics. This is evident from the titles alone, such as “Sandra from Scranton”. They’re built on telling tales and introducing us to varied and interesting characters. The echoes of ‘Bruce’ emerges on many tracks including the brilliant final track on the album, “I Was Doing Fine (Then A Few People Died)”. It has a soothing melody that is made even more appealing with the great female vocal harmonising.

This album pulls off the difficult task of being a set of songs that Hold Steady fans will love but also developing a style that will offer something to a new group of fans. There’s a sense that he has allowed himself the chance to explore a wider range of influences. The Hold Steady ingredients are all there – great characters, interesting lyrics and melodies, but without the need to capture most of them in a punk rock/US alternative sound. The album can be loved on it’s own merits but could also be the gateway ‘drug’ to hopefully introducing even more people to Craig’s ‘day job’ in The Hold Steady.