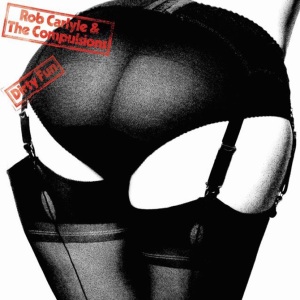 The Compulsions may be a new name to you, for now, but they consist of band members of some distinction. Led by a true rock n roll front man in the shape of Rob Carlyle on vocals and lead guitars. He is also joined by a couple of members of the recharged Guns N Roses but perhaps most impressively by the legend that is Sami Yaffa. If you know your rock n roll, you will know that Sami is one of life’s real rock n roll survivors and a former member of one of the best punk/glam rock n roll bands ever, Hanoi Rocks.
Opening number “Hell bound Babies” suggests we’re going to get an album full of pure punk rock n roll. You will, however, discover that there is a lot more to it than that. The first song actually reminds us of “Strange Behaviour” by the sadly short lived, The Throbs. Like that band, The Compulsion’s roots may be in sleazy rock n roll but they also show a more eclectic style on many of the tracks. This is immediately demonstrated by “Silly Little Woman” which adds a bit of funk to the sound and along with “Lucky” are probably the best Rolling Stones songs that there have been for a long while!! They even add a more ‘electronic’ feel to “Evil Bastard” which works as a great contrast to the more soulful vocal and gives it a really contemporary feel.

If anyone does fancy a bit of straight forward sleaze rock n roll then the band are more than capable of delivering that, as shown with the gutter slide of “House Of Rock” and the rockabilly esque jive of “I Still Got The Hots For You”. In contrast, “The Feel” has an almost Doors like sound as it talks about “the coolest band in the world”, something that you think could be an apt description for The Compulsions themselves. There’s a slower pace on “Stay Easy” but, despite it’s more relaxed vibe, you sense it is no less debaucherous.

Reviewing this album has made us really realise how rare it is to hear a really good rock n roll album. Given the personnel and experience involved with this band, then we probably shouldn’t be. This release has the feel of an album recorded by a band who follow the great lineage of classic acts like The Rolling Stones, New York Dolls and Sami’s own Hanoi Rocks. This is definitely going to be right up there as a candidate for one of our records of the year.