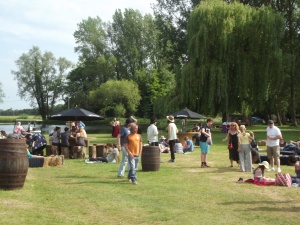 When it’s billed as a ‘weekend of whisky sippin’, rib suckin’ /southern blues, roots and country’ you know it’s something that http://www.thesoulofaclown.com are going to love. Having really enjoyed the festival’s debut last year, the only concern would be if this year could live up to it.
One thing that is for certain is that the organisers must have friends in very high places because once again they had booked some fabulous weather. There were reports of a risk of heavy thundery showers but the whole weekend really had the weather to match the theme (admittedly the temperatures weren’t quite up to the south of the good old USA). The venue itself remains a fantastic and very majestic site. The organisers also put every effort in to making the site match the ethos of the festival. It’s the little touches like the themed street names, lighting, card playing area, hammocks and old school kids playing area which really makes the difference. It also operates on the slower pace you would expect of the Deep South and with the low key stewarding and security it makes for a relaxed atmosphere (something other festivals are losing rapidly as they get more commercial). 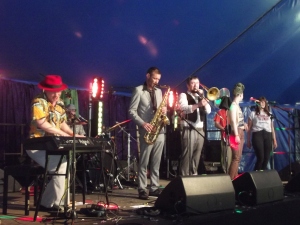 How about the music we hear you ask, whilst fixed in the American, roots, blues, southern rock genres it still provided a variety of acts. The first band we caught was Don Pipkin & The IKO’s who were a New Orleans influenced band keen on having a fun time. The boogie woogie piano, horn section and in particular the girl group backing vocals all helped to get the crowd in the mood. Even the more sedentary members of the audience, lapping up the sun, were at least tapping their feet. They were followed by The Black Kat Boppers who were certainly one of the highlights of the festival. They picked up the pace by adding some great rock n roll/rockabilly in to the mix. Bring a high tempo, a stand up drummer, double bass and a big soul voice.. What wasn’t to like. They played some swinging tunes which were quite simple but effective rock n roll. You can forget just tapping your feet, this was up and at ‘em, jiving music. As the band themselves said you get back what you put in! A truly excellent band who, very rarely for a festival, were given the privilege of an encore where they performed the classic Tutti Frutti. 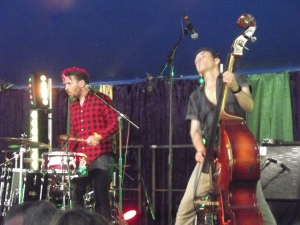 In contrast, Dollar Bill were very old school bluegrass/blues musicians although it’s hard to be anything other than traditional when you’re playing drums, guitar, harmonica and singing all by yourself. It takes a lot of talent to do that, especially when you’re playing with a glued together guitar thanks to the incompetence of Easy jet!! 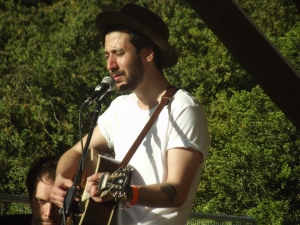 The second stage, “Jack Rocks”, was also really nicely done having been set up to look like the acts were playing in a quaint barn. On that stage Luke Tuchsheres offered up a far more upbeat and melodic sound to the whole proceedings. The two acoustic guitars, strumming nice melodies provide a great accompaniment to the beer and whisky that was being sipped by an appreciative crowd. The songs are delivered in a laid back fashion but with a strong and pleasant voice. The way you can walk between the two stages quickly and discover some new talent is a great thing about Red Rooster. 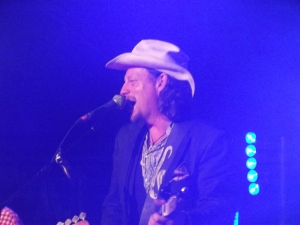 Later on, and back in the main tent, things are getting busy ahead of Iain Segal Band. Looking like a Texan cowboy he brings a bit of the Wild West to Suffolk. There is an undisputed sense of cool confidence and a guitar tone that the lifts the songs. Playing “Back Door Man” shows a man with blues and rock n roll in his soul. Smoking during the show just to prove he doesn’t give a shit before he rips into the blusiest, bad ass cover of Prince’s “Get Off” that you are ever likely to hear.

That all places quite a lot of pressure on the Saturday headliner, Kitty, Daisy & Lewis who are certainly the most well-known band on the bill over the whole weekend. They certainly add some glamour to the weekend and the way they constantly swap and change their instruments leaves you in no doubt that they are supremely talented. The songs cover a wide variety of styles from pop, rock n roll, blues and jazz. They’re at their best with the sassy, soulful numbers and when joined by a seemingly mad trumpet player. Overall, though, they struggle to really capture the crowd. In fact the instrument swapping and changing of vocalist doesn’t help this. They’re all very talented but you sense that one of them needs to focus on being the front person and developing the band’s charisma and stage presence.

We wouldn’t want anyone thinking that the night didn’t end in frivolity and fun though. There was plenty of that provided with the after show disco. This year it again, on both nights, it incorporated a great mix of Northern Soul, Indie and classic rock songs. It will surely soon earn the reputation as a legendary part of the weekend.

Hangovers eased by the fine weather, it wasn’t long before we were discovering more great music. Indeed almost immediately we discovered another of the top acts of the weekend. This was the Belfast band Smoking Angel Shades. Despite their name and the bearded grizzly appearance, they had a surprisingly melodic charm. There was almost an indie pop tinge, which lightened up the Americana influences. Indeed some of the tracks almost have the easy going sound of Big Star. They were certainly great for an early pm, sunny day show. They also earn extra credit for pushing out their new release in vinyl rather than CD. 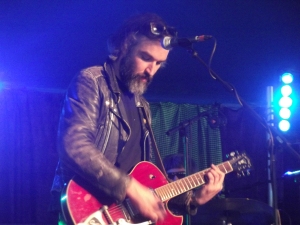 Back over on the Jacks Rocks stage, Delaney took the good step of playing a cover of “Come Together”. The next song named checked “Jolene” in an easy going Americana song which helped to engage the crowd. They had the appealing combination of a strong, sweet, female vocals with the accompanying, gentle, guitar strum. They also caught everyone’s attention with a really cool and unexpected cover of a Gorillaz track.


Davey Jones took things in a more rough and ready direction and were perfectly in keeping with the Southern Americana feel of the festival. They were a three piece who had the neat trick of using a box for a drum to keep the beat. With the addition of a slide guitar you soon forgot you were actually sitting in a field in Suffolk. The front man has certainly spent time perfecting his southern drawl and had a raspy but powerful voice which recalled the Kings Of Leon. 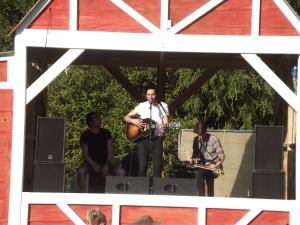 Whilst not the most inspiring of names, Steve One Bloke One Mandolin was surprisingly entertaining. He came across like a Sea Sick Steve type character and you couldn’t but help warm to him. The mandolin may not be our favourite instrument, but with a good dollop of charisma and engaging between song banter there was a lot to like. On stage confidence and knowing to interact with a crowd is something that Simon Cowell can’t teach you on the X factor.

Sadly the festival was soon drawing to a conclusion. The final headliner was CW Stoneking. He pitches his set perfectly for the festival finale. He brings a bit of glamour and style but more importantly a dose of rock n roll. There’s a combination of standoff rock n roll mixed with Doo Wop female vocals. Over the course of the set there is really a flavour of a whole range of styles from rock n roll, Blues, Jazz, Soul and Latin. It provides a great bookmark for what the whole Red Rooster festival is all about.
The festival is certainly going from strength to strength and certainly there appeared to be a much larger crowd (this brought its own issues with regard to the toilets in particular!). It also led to many of the food merchants running out which was a real shame as that was something that had certainly improved this year (special mention to the Meat Wagon’s hamburgers!). In the crowded festival market, Red Rooster has surely established itself within a well-deserved niche. Its growing popularity comes as no surprise as you will find it very hard to find another that can beat it’s laid back, easy going approach which results in a relaxed, fun filled weekend for all of those in attendance. Like many others, we will definitely be back next year.