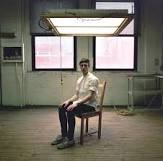 This is Luke Leighfield’s fifth album and he is clearly a man who is determined to put in the effort to make sure his music is heard. Not only has he played over 750 live shows but he has self-released his own material. It is therefore no surprise that he has been dubbed both the “hardest working man in indie” and “the UK’s biggest underground pop star”. It is also music to our ears to hear that he is confident and proud enough to declare that this is a “record made for radio”.

Indeed, when you hear opening track, “Begin Again”, the first thing that hits you is the strength of the sound, it is a real plush production. The song is relatively slow paced with a mature adult pop song style. That ‘pop’ sensation is taken further on the more upbeat “Fading Fast” and “Fool For Love” which are really great, catchy rock/pop songs. Calling them ‘pop’ may seem a bit throwaway. However, what we mean is that they’re well written songs built around a really strong melody with an instant appeal.

Songs like “Number My Days” and “Oh Canada” have a more emotive side which would make them prime candidates for selection on the soundtrack to the latest teen series or movies. Indeed, in the days of Dawson’s Creek, they would’ve pretty much guaranteed Luke instant success. Given this, it will also not be a surprise that there are a few tear jerkers along the way, including “When Will I Learn” and “First Love”. Although, the most interesting of the slower tracks is “Heart Problem”. This song has a slightly more quirky feel which just makes it a bit different.

It has to be said, however, that we tend to prefer the more upbeat songs and in particular “Battle With Myself” and the final track “Something Different”. These are the sort of songs which really could be huge hits, either with the right marketing or, sadly, if just flogged to a talentless boy band!

Amongst all the rubbish that gets pedalled as ‘pop’ or commercial music in general, it’s a real shame that gems like this don’t always get the exposure they deserve. Indeed, even when ‘serious’ music fans or critics do acknowledge it, it is normally with a bit of a sneer, see Maroon 5 as a classic example. It should be recognised that writing quality pop songs with the potential for wider appreciation is a damn sight harder than just being ‘cutting edge’. It is unlikely that Luke will be troubling the front pages of the NME but on the positive side, he is also likely to be here this time next year and will be writing good pop songs.