Chris Richards & The Subtractions “A Smattering of Mystery & Sound” 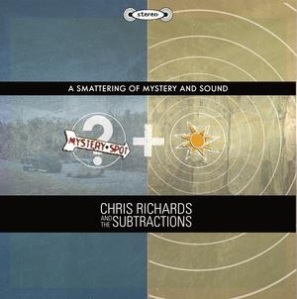 Chris Richards may not be a household name, yet, but he is no newcomer to the scene. He has been performing for numerous years in a variety of bands and guises since the mid-eighties. The most recent incarnation sees him playing with The Subtractions. Whilst the band may find themselves sharing the stage with many younger bands, this album offers a fresh and poppy sound which will appeal not only to Chris’ existing fans but also attract a whole lot more.

First song, “In A Sense” makes you aware, straight from the off, that this album is firmly in the power pop genre. Songs like this and “Call Me Out” have all the right ingredients in the shapes of crunchy guitar lines, vocal harmonies and a huge melody.

The album hits an early pop high with “She Belongs To Me” which is like a long lost Enuff Z’ Nuff song but without the lipstick and in full on Elvis Costello mood. It’s a similar style that returns on a number of tracks, including “Everyday Girl”. Whilst “Doesn’t Sound Like You” and “I Cant Quit Her” have a more sixties vibe that recall the likes of Jellyfish or The Posies.

They really step things up with the summertime feel of the effortlessly charming “Don’t Forget About Love”. The laid back feel also continues on the more traditional ballad esque “She’s Just Falling Out Of Love”. Really though, this album is just chock full of brilliant pop/rock numbers. Tracks like “Consolation”, “I, Miss July” and “Oh Canada (part deux)” are all equally excellent songs that demand listening to. Having a song titled “Sunny Day” is just perfect for this album as that would be the ideal climate in which to give it a listen. However, even on a wet, miserable day, the songs on the album will leave you feeling a lot warmer and summery.

At the start of this album, we were expecting another decent collection or slightly retro feeling power pop songs. By the end, it is quite obvious that we had underestimated it. The album is packed full of brilliant pop songs with the necessary strength and power to ensure that they aren’t ever lightweight. To have achieved this level of quality and consistency over thirteen tracks is no mean feat. If you’re looking for music to give you a pick me up, then this is definitely one to grab.