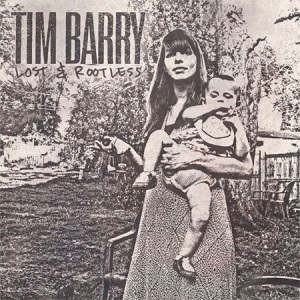 We first experienced Tim Barry when he supported Frank Turner. He was a hugely engaging and charismatic musician who managed to capture the audience instantly and win them over. The songs themselves were equally appealing and managed to both tug at the heart strings and have a sense of humour. He hasn’t wasted time in getting his next album out and therefore we were eager to see if he has kept the quality up on “Lost & Rootless”.
We hear a gentle acoustic strum on “No News From North” before that great raw voice kicks in. It’s a slow and thoughtful tune. The style continues on “The James” which has a mournful and wistful sound that portrays real heartache.

Just in case you are worried it may be all doom and gloom, up pops “Poppa’s Porch” which is a finger clicking, light hearted ditty. Then you will find it hard to not clap along to “Older & Poorer” with its country feel. When Tim does pick up the pace and add a more light-hearted feel to the song, the lyrics themselves remain quite down beat, as demonstrated by “Breathe Slow Let Em Pass”.
The title track “Lost & Rootless” and “Solid Gone” are just great songs that really demonstrate Tim Barry’s ability to deliver his songs in a story teller style. They end up like little plays all compacted into three minutes of simple acoustic tunes.

Whilst Tim may claim to be lost and rootless, that’s certainly not true of his musical style. That should surely be rooted firmly in the deep American South. Nearly all the songs are just Tim and his guitar (which we can only hope is some kind of beaten up old favourite, rather than anything shiny and new). The album is slow and melancholic but picks up the listener and gently takes them to the countryside where it sits you down on a dusty porch at sunset with a whisky in your hand. Not a bad place to be!