The Dirty Guv’nahs – “Hearts On Fire” 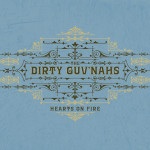 The Dirty Guv’nahs’ “Hearts On Fire” was released earlier this year and actually debuted at #1 on the Billboard Heatseekers chart in the US. The album was actually recorded in the band’s own home studio in Knoxville, TN which might explain why it has such a great authentic feel to it.
Their name certainly seems appropriate when you hear opening song “Where We Stand” which is a melodic, folk sounding song that has an almost Mumford & Sons feel to it. That is until about half way through when it bursts in to life and becomes a great more rocking number. It is followed by “Morning Light” which is an absolutely awesome song. It has a great pop/arena rock feel to it but still with that hint of Americana. If you aren’t swaying and singing along to this song then you must be as hard as stone. Things slow down at the start of “Lovin” which initially has a country feel to it. However, they soon add a funkier feel to give another song that you will be singing along to. “Ever Start To Wonder” is another high spirited song that is just so much god damn fun.

They finally take the pace down on “Dear Jamie” which is a moving ballad in the vein of an epic, Springsteen influenced song. “Slow Down Easy” again begins slow but then also builds in to another epic arena rock song. A special mention must go to the fantastic female backing vocals, which really lift this song. “Under Control” sees them entering the big rock sound of The Kings of Leon but has it’s roots more firmly in the sound of the far more authentic, good old boys, Lucero.
Showing an admirable sense of variety, the next two tracks, “Three Little Angels” and “Someone To Love” add a more soulful feel. The first is a ballad when again the adding of some brilliant co vocals (from Amy Helm), really give the song a sense of lightness. Whilst “Someone To Love” is a great country esque ballad with some great tinkling ivories and Hammond organ. The album ends with the brilliant “Canyons” which is a beautiful and epic sounding song. It’s like the track that Coldplay have spent their entire career trying to write but have never quite made it, it’s really breath taking.

Having not come across The Dirty Guv’nahs before, the quality of this album actually came as a bit of a surprise. They have managed to perfectly capture a mix of rock, country, Americana and pop to produce a fabulous collection of songs. Even more impressively, they have managed to do all of this without sounding at all contrived or ‘forced’. “Hearts On Fire” is an album that slips effortlessly from being upbeat and pop to melodic and epic. Definitely one to check out.