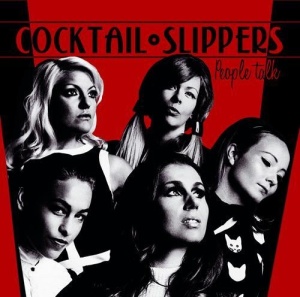 Cocktail Slippers are an all-girl rock band from Oslo, Norway. The band was formed in 2001 and the debut album “Rock It” was released the same year by the Norwegian record label MTG Records. Their recently released album “People Talk” is actually their fourth. Unlike some bands, however they don’t appear to have lost any of their vitality or desire to really rock n roll.
There is certainly no holding back on opening track “Show Em Good” which is a brilliant pop rock song that sounds like a sweetened Joan Jett. It has a bubble gum feel to it with infectious backing vocals and hand claps. “Shame On Me” has more of a down and dirty groove to it. The melody is still there but is delivered with far more of a swagger and sneer. “48 Hours” is another sleazy rocker which shows that these girls aren’t all sweetness and light, despite the angelic harmonies.

The band really hit a glorious pop high on “Sleepless”, it’s like the best seventies AOR/arena rock track you have never heard. The chorus is awesome and so poppy it’s almost like The Bangles. In contrast, “Castles In The Sand” sees a departure from the pop/rock sound and is a surprisingly subdued and harmonious song. It is a huge song and shows the band are capable of delivering a more expansive sound.
They are back to having a fun time on “You Give Me Woohoo” which is another pop rocking tune with a hint of glam rock. It will have you clapping and dancing along to it, as will “Cha Chas Place”. They follow it up with yet another huge pop tune called “Soul Salvation” which also has that glam feeling coming back. It’s a song which really should accompany a huge teen flick about summer and fun.

Things change a bit again with “Come Running” which starts like the Blues Brothers before moving in to another catchy tune. Final song, “Keep On Dancing” ends the album on a wonderful high with a brilliant, rocking, power pop song. The hand claps and awesome backing vocals are all back to leave you singing and dancing along.
Sometimes, it’s great to find an album which is just full of brilliant, fun filled songs. If the objective of the Cocktail Slippers was to create an album for a party mood, then they have certainly succeeded with “People Talk”. If you want to be morose and depressed then you had better look elsewhere. This is the album to put on as you have a few drinks and get ready for that big, rocking, night out.