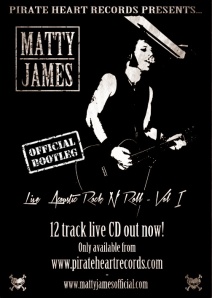 This is a live album which is being released ahead of Matty James’ full album and he is keen to highlight that it is a proper, from the sound board, live recording. This is certainly true, as it’s a raw live album where you can even hear when the sound man turns the volume levels up. In fact, it is so ‘real’ that you even get the annoying sound of some people chatting and distracting you from the music.
The album and set opens up with “A World Away” which is a really good, upbeat, rock n roll track. All the songs on this album are just Matty and his guitar, but he still delivers a rocking sound on this one. Later on, “Find Myself Again” is another song with a more vibrant sound. It would be good to see this being developed in to a great sing a long song, with full band backing and production. “Couldn’t Love Me” has opening chords reminiscent of ‘Knocking On Heavens Door’ but again, with its angrier lyrics, you can see it being more of a rocking song.

“Uncertain Times” is a slower, more of a ballad song and the first of many on the album that recalls another great music troubadour, Tyla from The Dog’s D’amour. “State of Mind” shares this comparison with it’s gentle strum being accompanied by the rougher voice. Lyrics like “Have a drink and try to drown” help to give it all a world weary feel. “You’re Not The Only One” is similar and in particular is one of the tracks on which you really want to hush some of the chattering crowd down! On “You Sleep Too Much” you really get to hear the passion in Matty’s voice, in what sounds like another tale of despair.
“Can’t Go Home” brings the set to a conclusion with a song which would be a perfect sing a long ending. It ends what must have been a gig that would have sent the crowd home happy after a great night out.
Fair play to Matty for getting this live album out there. When you release a raw live album which consists of just a man and his guitar, it is always a brave move. The album really captures a small venue gig with a clearly passionate musician. It has such a genuine feel you can almost taste the beer or two (or three or four) you would have enjoyed whilst listening to the songs and great performance from Matty James.