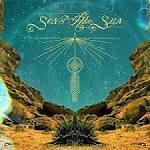 Sons Of The Sea is actually the new project by Brandon Boyd, probably best known as the vocalist for the band Incubus. There is, however, much more to him than being a vocalist of that band as he is also an artist, author, activist and surfer. As a man who is incredibly creative and having so many interests it would certainly be wrong to expect he would settle for doing a solo album which sounded like a new release from his band. This album therefore has a variety and quality which should see Brandon attracting a whole host of new fans, many of whom will not even have heard of Incubus.

The surprises start off straight away with the vocal harmonies on “Jet Black Crow” which are almost Queen esque but it soon shifts in to a really pleasant pop, singer songwriter song.It may not be what you are expecting but it is really good. We will see the same type of impressive vocal harmonies cropping up later in the album on “Lady Black”.This ends up progressing to an almost eighties sounding pop/rock chart song.

“Space And Time” is even better but again has an adult indie pop feel to it. In fact, it sounds like it could be a Manic Street Preachers song, when they are at their most commercial. “Plus/Minus” adds a bit more indie rawness to the sound, in the guitar line but it still builds to a fuller sounding, melodic sound. It’s not until we get mid way through the album and on to “Great Escape” that we get a slightly harder/edgier sound but this is really only from the grungy bass line during parts of the song.

Sadly, “Come Together” is not a Beatles cover but instead another mature pop song which has a real commercial appeal, even ending with a ‘nana nana’ refrain. On “Hey, That’s No Way To Say Goodbye” it even goes as far as to have a whistled chorus. In fact, it could almost be a later Take That song (a la ‘Shine’) – I kid you not and YES that is a compliment.

Things only turn a bit more down beat sounding with “Where All The Songs Come From” as it is more focused on a melancholic tone. “Avalanche” keeps the slower and toned down mood in a song which is an almost epic musical show tune ballad (again very surprising.)

The album actually ends with three acoustic versions of the songs. If ever there is a test of the quality of the song writing it is to strip it down. It will come as no surprise that here it just confirms they are all just finely crafted mature pop songs.

This album has come as a huge but unexpected pleasant surprise. It really is a fine collection of well written and performed adult pop songs. Brendan was wise not to just use his own name which would have caused confusion and detracted some listeners. Sadly, the association with Incubus could put some off, which would be a real pity. Who knows what the Incubus fans will make of it, although even that band moved to a more melodic sound as they went on. Hopefully those fans will have matured like Brendan has and really appreciate these tunes too. Anyone who enjoys good adult based pop with a much needed dash of authenticity, will love this.