Jonny Cola & The A Grades – “Spitfire” 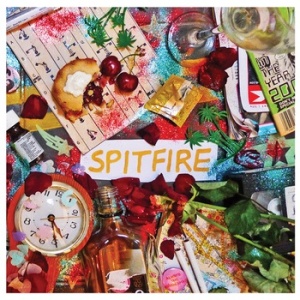 How many times do you hear bands talking about having to go through a really difficult time with the recording of an album. Usually, this is just because they couldn’t write anything decent, they’ve been dropped or the drummers slept with the guitarist’s girlfriend. However for “Spit Fire” it really was a serious matter with much of the material was written last year, as Jonny first battled end-stage kidney disease, and later recovered from a life-saving transplant operation. The fact that, as he describes it, “I’m never out of danger because the donor kidney doesn’t last forever. The average life expectancy of a kidney is about 15 years”, perhaps explains why this is an album so full of life and fun.

“In The Woods” kicks it all off with a great glam rock stomper. It’s like a modern glam T Rexy song and it just great fun. It is the first of many similar songs, e.g. “Going Over” which appear throughout this fine album. “Tropical Beach” see them add a bit more ‘pop’ shine to their glammy sound. With great lyrics like “I’ve got a bottle of gin and a head full of sin” you know you are on to a good thing. This is a song for care free, wild teenage days, or for those older fans, one to relive those day to.

There is quite a change on “Straight To Video” as it is a much slower track which would appear to have been influenced by David Bowie. It has that Ziggy Stardust, space/epic feel about it. It is probably a good reminder that we are dealing with a talented band here and not some trash act. Although that’s not to say they are not susceptible to a bit of throwaway punk pop, as brilliantly shown on “Rain Stopped Play”.

We are soon back to that seventies glam pop sound on “Blow Up’ which is retro and fun. You will love it and, almost despite yourself, will soon be putting a bit of glitter on you face. “Sunset/Sunrise” sees them move into ballad mode and it will be time to get those lighters in the air and shed a tear for the girls who have come and gone.. well that’s until you get to the short mid song poem!

“Wrong Head” sees the pop side coming back on a song where the power pop influences really shine and maybe a hint of a band like Suede. Final track, “Out Of The Woods” is back in Bowie land with the vocals over a piano sound at the beginning. The whole song then builds to an anthemic and epic conclusion to the album.

Jonny Cola & The A Grades have managed to perfectly blend a glam/power pop sound. It pulls off the tough task of being throwaway and fun but still essential. One of the few bands to have achieved this and could be a comparison to the sadly ignored “Last Great Dreamers”. Their album, like this one, was a perfect mix of retro seventies glam pop with a modern rock band sound. Once you’ve listened to this album you will be reapplying that glitter in the hope you can catch Jonny Cola & The A Grades somewhere live.