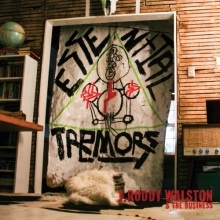 This album was actually released in the US last week but, thankfully, it is now to get a UK release on 10th March. It is actually the band’s third release and is an eclectic album which brings together a brilliant mixture of classic rock & roll with a Motown sound and a bit of funk thrown in for good measure.

There is a gentle opening to “Heavy Bells” before it hits you in the face with the screaming chorus. It certainly makes sure you are awake and ready for the rest of the album, as it moves into a huge Led Zeppelin esque riff. A similar, deep and dirty riff kicks off “Black Light” but this is then joined by sweet and breathless vocals a la Marc Bolan. It actually eases in to an almost glam rock type classic with a chugging riff. The Zeppelin type guitar is again present on “Sweat Shock”, but this is a more bluesy influenced song and has a sound similar to what the Black Keys achieved on “El Camino”.

“Marigold” sees the band really hitting their stride on a great rock and roll song with a brilliant Bolan/T Rex feel underpinning it all. This is truly a fantastic song to get you up and rocking. The funk element comes in to play on “Take It As It Comes” which again spruces it up, with some glam background vocal ‘aahhs’.

The strength of the band and the album is the way all the sounds mix and compliment each other so well. They take a breather from rocking out on “Nobody Knows” which is a more soulful and slower number. It still has a huge sound, but provides a nice change of pace. Another slower one is “Boys Can Never Tell”, it is a simple but effective, relatively acoustic, number with an almost Americana feel to it.

The funk is back, big time, on “Some Days”. It kicks off with some great fun filled drums and riffs, then chugs along with that now familiar glammy, almost power pop, sound. It’s a similar story with “Tear Jerk”, with it’s pure rock and roll feel. The album then concludes with “Midnight Cry”, a big balladry type song. It’s a mix of a kind of old school soul song played by a glam rock band. Imagine if The Kings of Leon were at their most overblown and dramatic but covering a glam song!

Despite the influences, this actually sounds to me like the band for anyone searching for a T- Rex of the modern age. It’s not, however, some cheap copy or a throw away act. Instead, it’s more like the music you would hope Marc Bolan would be playing now. When you look at the success the Black Keys had with “El Camino”, there is no reason why this couldn’t do the same. A bit like when you first hear that album, you will want to turn it up loud, dance and have fun. This is definitely one to file under essential purchase!