Various Artists -“A Psych Tribute To The Doors’ 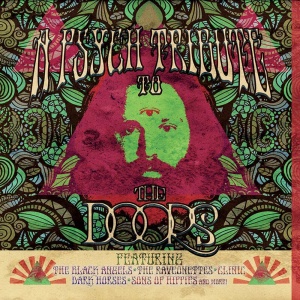 Any tribute album is always going to be a difficult one, especially for a legendary band like The Doors. The job is made even harder by the fact that many of their fans are die hards who regard them, and Jim Morrison in particular, in a god like status. It’s therefore inevitable that such an album would have some hits and misses.

So lets get the negatives out of the way and talk about those songs that don’t really work for a variety of reasons (not always the fault of the bands who perform them). By example, “Love Me Two Times” by Psychic Ills doesn’t work, mainly because it is one of The Doors simpler songs. It is just a plain rock n roll song and so a slower version just sounds like any poor covers band unable to generate the excitement of the original (for a great version though, check out The Aerosmith one!). Whilst Sons Of Hippies’ version of “The Soft Parade” just highlights what a rambling mess the original one was really. Similarly, “Touch Me” by Clinic is just an appalling version of, admittedly, another of The Doors’ weaker songs.

However, a couple of the worse mistakes are made on some of the band’s biggest and greatest epic songs. The Skeletons’ cut down and sparse version of “Riders on The Storm” really doesn’t do any justice to the original. Perhaps most disappointing is The Ravonettes version of the classic “The End”. The fact they cut this epic song down to just three and a half minutes shows that they have totally missed the point of the song. This version then goes on to bear no resemblance to the original at all.

Don’t go away yet though, because there is enough on the rest of the album to attract even the most ardent of Doors fans. In fact, this is shown by the very first song on the album, “La Woman” by Elephant Stone. The female vocals probably help by immediately setting it apart from the original. However, they also slow the whole thing down and give it a great, darker and intensive sound. The female vocals on “Lover Her Madly”, again helps as the lyrics sound great sung by a woman and it also manages to retain the sixties charm of the original.

The Black Angels version of “Soul Kitchen” retains the original sound and is a faithful version but with just more of an added psychedelic edge. “Hello I Love You’ by The Dark Horses probably benefits from taking a less loved song and this swirling version is therefore bound to be more readily accepted. “People Are Strange” by Camera is indeed a strange one, mainly because, on hearing it, all I can think about is how it sounds like a song that was released by either Elastica or Kenicke, i think!

The award for the bravest band on the album must go to Wall Of Death for picking probably the best known Doors’ song “Light My Fire”. Fair play to them, because they pull it off by giving it more of a gothic feel, which moves it away from the falsely sunny feel of the original. The only downside is the huge mistake to use what sounds like a saxophone solo instead of the brilliant guitar solo of the original.

As stated at the outset, it is easy to write this album off as it’s a big, but intriguing risk. It is, understandably, a bit hit and miss but it’s certainly worthwhile giving it a listen. Indeed, I expect many people will have totally different thoughts on which songs they think work particularly well or not. Actually, a lot will depend on your own love or view of the original song. Also, even those version you don’t like will at least make you want to go back and re-discover your love of the original. Those that you do find work for you, will provide a nice new interpretation to enjoy.