The Hard Fall Hearts are a psychobilly/punk band from San Diego who are doing a great job in bringing this type of music to a modern audience. They manage to create a sound which has a darker edge that entraps the listener. Drummer Eli Rinek kindly took time out to give us some information on the band:

Can you give us details of how and when the band formed?
The band formed in March of 2008. Bryan had a group called The Handsome Devils and decided to move on and hire a new rhythm section with a new direction. Eli and Ian a.k.a. “Rocket” had just quit playing in the Del Fi’s and were available to audition. Funny thing is a gig was already booked for Eli’s B-day on March 29th. Our first rehearsal was March 28th and we basically played our first show 24 hrs. later. Our first album titled ‘Last 24 Hours’ was in honour of that.

Who are the main songwriters in the band and what process do you go through?
Bryan writes most of the songs. Eli did write the title track to the new EP ‘Die Before We Die’ while on tour in Europe in 2011. Eli also wrote ‘Stay’ and ‘Long Hard Road’ on the 2nd album ‘To All Believers’. So basically Bryan writes about 90% of the material.

How would you describe the band’s sound?
Melodic Punkabilly. Basically the only real “billy” part of us is the fact we use an upright bass. Our influences are so diverse and mostly from punk, 80’s dark pop, rocksteady and rock. For example we do covers from Sex Pistols, The Cure, Rolling Stones, The Living End, Modern English, and The Smiths. Sure we can play Johnny Cash and Carl Perkins all day long with our eyes closed.

Having reviewed a couple of your releases, including the latest EP Die Before We Die (see review here https://thesoulofaclown.com/reviews/e-h/ ) what has really impressed me, is that you are bringing a more traditional rockabilly sound bang up to date. Is that a definite intention of the band?
That’s quite the contrary!! Most bands we get compared to are considered psychobilly, punkabilly, or neo rockabilly. Most “traditional” rockabilly bands would definitely argue that we are no where close to traditional and we prefer it that way. We have our own sound and it’s hard to pigeon hole us.

Is there much of a rockabilly scene in your local area or indeed much of a movement across the States at all?
Yes, one of the largest Psychobilly scenes in the world is near here in LA. The other of course is Europe. We play shows with so many genres of music that we kinda fit into the punk scene too. The scene is decent here in San Diego, for the most part people come out and support.

Who are the main influences on the band?
Definite influences are The Living End from Australia. Bryan is very fond of Chris Cheney and his tone/style. We love punk bands like Social Distortion, Sex Pistols, TSOL. Rock like Rolling Stones, The Cult. Dark pop like Cure, The Smiths and New Model Army. Throw some rock/dirty reggae like The Police and The Aggrolites for good measure!

I am always keen to discover new bands, so who are you listening to or really liking at the moment?
They are definitely not new but we’ve been listening to New Model Army a lot. Also while on a recent tour just listened to every album from ‘Me First and The Gimme Gimmes’ a band with members from NOFX and Swingin Utters.The only do cover songs of all your favourites!! We admit to be fans of ‘Tiger Army’ no matter how much flack they get. We love Rancid, new AFI album is impressive! If we’re feeling emo a little Cure, The Smiths or Morrissey does the trick haha!

How tough is it for a band like yours to get coverage, promotion, record company attention etc in todays music industry?
Let’s see it took us about 5 years to finally pick up a good indie label that we are happy with. We are currently with Splatterhouse Wreckords from Tacoma/Seattle area. http://www.splatterhousewreckords.com . We worked hard to get ourselves over to Europe the first couple times but now we are represented by Torpedo Booking in Berlin, DE. http://www.torpedo-booking.de/ . All of our booking in the US is handled by our lovely agent Betty Elle at Naked Betty Booking. http://nakedbettybooking.com/ . Basically to get where we are took a lot of hard work, live shows, shameless self promoting on social media etc. Once you have accomplished this, you finally get some notice from media, promoters, etc.

What about the role of the internet? Do you see this as an advantage to you? (this also gives you a chance to push your own site and give details on where readers can buy your stuff!) 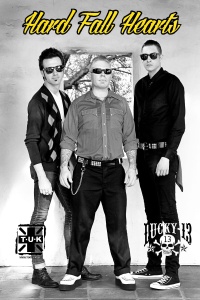 I understand you are planning a visit to Europe in 2014, will this include the UK?
Our upcoming European tour in 2014 will not include UK unfortunately. It will include Belgium, Holland, Germany, Czech Rep, Austria, Switz, and France. Our previous tour we made it up to Finland. This time it’s looking like we’ll hit Norway in Scandinavia. All of our tour dates are posted and updated on our website. Most of the Europe dates will be 100% confirmed no later than July of this year. We already have a solid portion of that tour booked though.

How would you describe a Hard Fall Hearts gig and what type of audience do you seem to attract?
Describe an HFH show huh!?? Loud, fast, full of energy but melodic enough to sing along and your girlfriend will have a good time!! Bryan and Andrew wear skinny jeans so it makes them jump around on stage more! haha We attract rockabillies, psycho’s , skins, punks, teddy boys, skaters, surfers, pin up chicks, greasers, gear heads, and music lovers in general…

Other than touring, what else can we expect from Hard Fall Hearts in 2014? Are there any plans for any more new material?

Other than touring doesn’t leave a whole lot of time cause we’re on the road quite a bit. BUT, we will be on location here in SD filming our official video for ‘Carry Me Along’ off the new EP Jan 31st. Jan. 25th we attend NAMM fest in Anaheim, CA. Eli will be representing T-Cymbals, Silverfox Drumsticks, and Rat Rod Drums. Bryan will represent Gretsch Guitars. Andrew will represent Blast Cult (fine builders of Upright Basses & other instruments). We are proud to be endorsed by these companies respectfully. Of course we are always working on new material and learning interesting covers to change up our set for the good ol’ fans!!. As far as releasing anything new, we may be putting a single out on a compilation for our record label later this year. A full length will not be a priority for us until next year.
Thanks for the interview Paul! Hope you enjoy. Keep on rockin on!

It’s a real shame that the band aren’t planning an album or indeed a UK tour, but that is no excuse for you not discovering this band right away. In fact, why not check them out now, before your friends jump on the band wagon, then at least you can say you were there first!