The Long Tall Texans – “The Devil Made Us Do It” 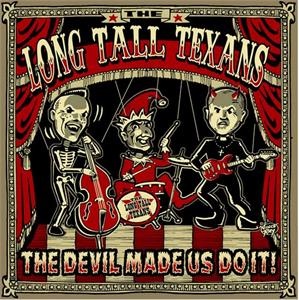 This is the latest album from the psychobilly band, The Long Tall Texans. Describing their sound as “amazing, sugar-psycho-country-rockabilly-western punk- cocktail” you should probably know that this not going to be some run of the mill album.

After the mainly instrumental intro of “Taxi”, we get a great example of what the band is all about with “Girlfriend”. Whilst they may be considered psychobilly, this is really just a fast paced rockabilly song. Unlike many bands of this ilk, there is far greater use of humour rather than shock or horror. This is certainly true with the title of one of the other songs, “Sex Beer and Psychobilly”. It’s always good when a band spells out it’s influences and passions in their song titles and,lets be honest, it’s not a bad list! Then on “Terry” it’s a similar style, but this time the band add in more of a ‘pop’ feel to the vocal sound.

“Kamikaze Killer” is closer to a more straight forward psychobilly sound, with it’s quicker pace and darker lyrics, a style which also influences “Covered In Sin”. “Kill Me” keeps the same theme going, but this time adds the hint of a country sound. Although we are talking more Wild West than barn dance!

Whilst not exactly child friendly, ‘What Part Of Fuck Off Don’t You Understand”, see that sense of humour coming back. It opens with a classic fifties doo wop sound, but eventually moves in to a great fun rock ‘n’ roll song.

The best songs,however, feature towards the end of the album. “I Fell In Love With A Zombie” sees that psychobilly influence with the reference to Zombies, but again they make it in to a much lighter and fun song. This continues into a horror double feature with the brilliant “I Used To Feel Funny”, this one being about being a werewolf! Again it’s a corker of a song with a cool punk riff and some great tongue in cheek lyrics.

The final song “Feels Like Ice” opens with some great Glitter Band drums, before a brilliant crunching, glam guitar riff kicks in. The punkabilly sound then takes over to leave the album on a real high, with this probably being the best song on it.

The Long Tall Texans associate themselves with the psychobilly scene, but they actually offer much more than just being a cliched band in that genre. A lot of this is to do with the humour used, but importantly this is not throwaway or to the detriment of the songs themselves. The second half of the album is particularly strong. It would be great to see a band like The Long Tall Texans cross over to a wider punk/rock audience, because they certainly have a lot to offer.