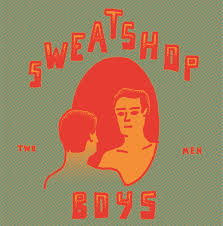 Firstly, let’s give credit to this band’s name..just quality! We don’t know if it’s just us, but there seems to have been a bit of a resurgence in punk rock music these days. It’s even hitting the mainstream with the likes of Idles. Perhaps there is at least something to thank Trump for as shit politicians often leads to great music!

This album is certainly great. It opens up with the anthemic punk of “Distractions”, a simply glorious song which is like a mixture of The Clash and The Ramones (yes, it really is that good). It’s not even the only one. Tracks like “Brian” (ironically a very un rock n roll title), “Unaware (Coco)” and “The Strongest Boy” manage to have a sense of punk angst but also a throw away rock n roll feel to them.

That’s not to say the Sweatshop Boys aren’t capable of delivering some straight up punk. Fans of that style are catered for with the more in your face sound of “A Watched Pothead” and “Vertigo”. Together with “Hard To Realize” these are the tracks that we would imagine will get the audience very sweaty at their gigs.

Like the aforementioned The Clash, The Sweatshop Boys also have a knack for adding in some contrasting styles. There’s a real off beat sound to “A Terminal” and “Too Young” which actually recall another bunch of punk rock heroes, Hanoi Rocks. It’s then a pretty much punk n roll party right until the end with “The Cowboy Song”and “A Boy Who Only Locks His Door”.

This really has the feel of a seminal punk rock album. It doesn’t seem to be afraid to show its influences (and why should it when they are legends like The Clash, Ramones and Hanoi Rocks). It may not be particularly ‘new’ or even inventive, but somehow it feels just right for these times. With all the shit in the world we really need some great punk n roll like this!