Stop Calling Me Frank “Spider In My Beer And Other Songs” 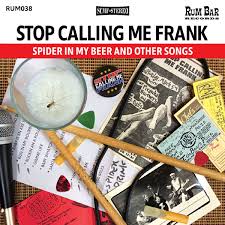 It must be tough knowing what details to include when promoting a band and their new release. But as soon as we read that this was an album of “greased up punk n soul from the pub” we were sold on it!

In line with the band’s name and the first song’s title “Spider In My Beer”, it is clear from the off that this is not a band full of pretensions (thank god). That song along with “Baby Watcha Hiding” and “Bug In My Bourbon” are relatively simple rockers with the emphasis on fun. They have an almost fifties/sixties rocker feel to them and have you wishing for simpler times.

That overall, good time feel really hits home when the band bring out the horns on the likes of “Gimme Life” and “My Baby Is an Axe Murderer From State Of Wisconsin” (snappy title!). The sound is very much in line with that of another artist we recently reviewed, Mariano (see that review here). These are rock n roll songs but also with a cabaret feel to them.

Things hit a particular high with the old school rock n roll feel of “Back Of Me”, although admittedly we’re a sucker for a cowbell opening! There’s a slightly sleazier tinge to that song and “Every Time I See Her”. It’s a sound that has us thinking of a laid back New York Dolls or The Stones on “Know Nobody”. Whilst “Beat That Dog” and “5,000 Miles” see us going further back to a more rockabilly sound.

Some albums feel like they demand an in-depth analysis for a review (not always a good thing!). But with this release, Stop Calling Me Frank have kept things simple and just released something which is catchy and fun. In our opinion, that’s sometimes all you need for a record.