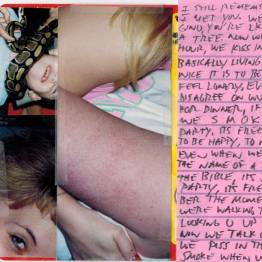 Who doesn’t enjoy a Tequila Sunrise on a hot day? More importantly who doesn’t like the idea of a band playing ‘extremely catchy songs that could easily be ripped from the soundtrack of a 90s/early 2000s romantic comedy’? We love both, so listening to this release from NY indie rock-duo Super American was a no brainer for us.

It’s clear from opener “Commitment Issues” that Super American know their way around a pop tune. If it wasn’t for the fact it has a more ‘mature’ feel this could easily pass for a ‘boy band’ type track. Indeed, when you listen to this album you need to be prepared for some high on saccharine songs like “Estoy Eternemente Lo Siento”. Don’t get us wrong though, these are really great songs. They are pure pop songs which in the right (or maybe wrong) PR hands could be big commercial hits.

There is also a slightly kooky, indie feel to songs like “Hands Down Olivia” and “Sleeping In Jeans” that are surely going to leave to comparisons to The All American Rejects. Like that band, Super American are able to make insanely catchy songs “Chris From Walmart” and spice it up with some clever and amusing lyrics.

It’s easy to dismiss the album on first listen where there is a sense that the songs are familiar. But after a couple of listens you start to pick up the subtlety of the tracks a bit more. For example, you get caught up in the more electro beat of “Neon Lights” or just get taken away with the upbeat bounce of “Baby Blue” and “Coconut Shrimp”. The fact is this album is just chock full of brilliant songs like the double whammy of “Date (You Got Blisters)” and “Givin It Up”. Tunes that will just worm their way in to your brain and soon have you singing along.

Bands delivering great pop music are so often overlooked and not given the credit they deserve. Occasionally, one will get acknowledged for the fact that they write great songs with catchy melodies (The All American Rejects). But, sadly, it will just never be ‘cool’ to like bands such as The Dum Dums, Busted or Scouting For Girls. But f**k that, we love those bands and you can also add Super American to that list. Who cares about being cool when instead you can listen to some great tunes that make you feel good.