The Dirty Truckers “Best Of” 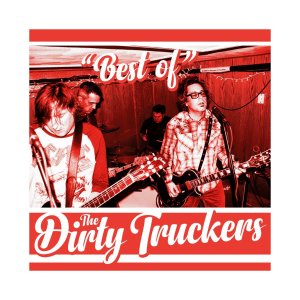 This is a great release for us as we only recently discovered The Dirty Truckers with their excellent release “Tiger Stripes”. The release of this best of therefore gives us a great opportunity to dip our toes in to their back catalogue.

They’re certainly a band where their name gives a great insight in to their sound. The ‘dirty’ is certainly there on tracks such as “Like Him”, “Been Around” and “All She Ever Wanted”. They are all just great rock n roll songs. They also have a kind of US alternative side to them which has our thoughts wandering to the likes of The Replacements or even maybe Husker Du.

In terms of the ‘truckers’ reference, there is also a hint of Americana and an almost country tone to “Sea Pines”, “Boston Wrangler” and “Without A Sound”. Let’s be clear though, we aren’t talking line dancing country! It’s more a harder edged Americana sound. But while other songs in that genre have a tendency to slip into something a bit wimpy or apologetic, that’s definitely not the case here. Even on the gentler tones of “Just Run Away” or “Simple As That” there is still a stronger melody that lifts the songs.

There’s also plenty of more commercial melodies on the likes of “Settle Down” and “Brat Pack”. In particular, when you hear a song like “Human Contact” it’s hard to understand why they aren’t being blasted out across US commercial rock stations. You kinda feel they must always have been close to having one hit that would’ve transformed them (a la Soul Asylum). Certainly, songs like “Not That Into You” could easily have provided that hit.

We guess there is always a risk when listening to a best of album that the band (or label) have just done a great job of picking the great from the dross. But there are just so many good ones here for that to have happened. Given a band like Train have gained huge international success for peddling a watered-down version of this American rock music, we can only hope that bigger acclaim and success can be delivered to The Dirty Truckers with this release.

One response to “The Dirty Truckers “Best Of””