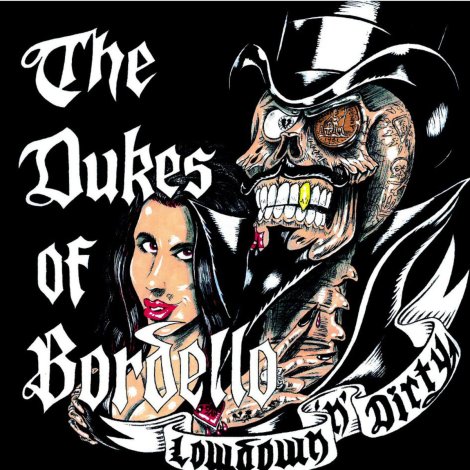 We know that you shouldn’t judge a book by its cover… but let’s face it, with a band name like The Dukes Of Bordello and an album titled “Lowdown N Dirty” this ain’t going to be a sensitive and introspective album.

That’s confirmed by opening tracks “All In The Name” and “Hellvis”. These songs contain classic rock n roll references such as blue jeans, slicked hair, James Dean and Elvis. As for the music, it’s an in your face and dirty variant of rock n roll.

There’s clearly a rockabilly influence, but songs like “Doing Just Enough” and “She’s My Witch” are delivered with real punk spite. Indeed, things move in to almost psychobilly territory with “Wrecking Ball” (no, sadly not a Miley Cyrus cover!).

As the title implies, things get even dirtier with “Down In The Gutter”, a catchy little rock n roller. “King Of The Road” slows things down at the start, but soon grows into a slithery, darker tune. That darkness continues with “The Devil Rides Out”, it’s also the point when the band ease off the gas..But only for half of the song!

They’re soon back to full rocking style with “Born To Die” but even that’s just a warm up for the ferocious finale of “Scream”. This last song is surely one to get the mosh pit flying at their gigs.

This is certainly not a record for the faint hearted. It may be built on a ‘traditional’ rock n roll or rockabilly sound but this is a fierce release. It leaves you wondering how wild their live shows must be, as these are songs equally likely to start a riot as get people dancing.