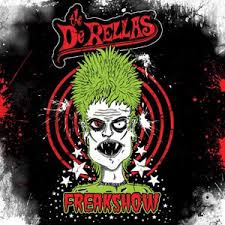 Sometimes you just know you’re gonna love a band from the moment you hear about them or even see them. That’s the case with us and The De Rellas. The only strange thing, is how we have managed to miss out on them for so long. That was something we were determined to put right when we heard about their latest release “Freakshow”.

We love a bit of sleazy, gutter punk, rock n roll and that’s the perfect description of opening number “Rip It Up”. Things get even better with “Strung Out Sin City”, a song which starts off like The Ramones before developing into a punk n roller which will make you think this is a New York City band a la D’Generation.

There’s a slightly different tone to “Soho Hotel”, which does have a more British sound, with a throwaway rock n roll feel that recalls the legendary Dogs D’amour or maybe Hanoi Rocks. They certainly seem very similar to the latter of those two on the glam rocking title track “Freak Show”.

We kept waiting for the quality level to dip, but it just doesn’t. “Dress Up Mess Up” is a classic glammy rock number which builds in a pop melody to a sleazy rock sound.Sadly, things are over too quickly with final number, “Plastic Surgery”. A song which starts off surprisingly downbeat, before soon growing in to a really snotty punk rock track.

This is one of those albums which makes you delighted to have discovered a great new band. The term glunk (ie glam and punk), perfectly suits their sound. Anyone who enjoyed the classic, sleazy, rock n roll sound of the other bands mentioned in this review will LOVE this. Our next mission will be to buy all their previous releases and make sure we see them live as soon as we can.