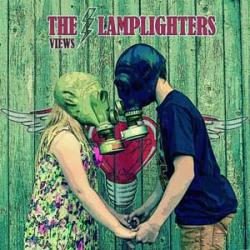 If we’re honest, we don’t normally associate Germany with melodic punk rock, but The Lamplighters are aiming to change that. They certainly have a good source of influences that includes The Ramones, Hot Water Music and Against Me. Also, the use of the words ‘melodic’ and’ ‘punk’ in the same sentence should put this release right up our street.

It is clear from the opening song, and title track, “Views”, that their influences are indeed from the U.S. punk scene. It’s a rousing opening number which shows a band with a punk heart, but also an ear for a tune. It’s the same with “Here And There” and “Burden” which almost gets as melodic as early Gaslight Anthem, although admittedly with much harder and gruff vocals. One of the highlights of the album is the brilliant “Basement” which, with its Ramones’ simplicity, really makes you want to go out and form your own punk rock band!

For those who prefer their tunes closer to a more ‘hard core’ sound, then the intensity of “Fairy Tale” is likely to appeal. Along with the short, sharp “I Don’t like You”, they’re some of the harder songs on the album. We assume that, along with “Getting High” these will be the ones to get the mosh pit really fired up at gigs.

Although, we must admit, that our own preference is for the songs where the punk intensity is balanced with the melody. Songs like “Wish” and “All We Need” keep the driving guitars but have a stronger melody running through them. They’re the sort of songs that will appeal to fans of bands like Against Me, The Restorations and The Lawrence Arms, to name but a few.

In some ways, it is quite reassuring that there continues to be a demand for punk rock bands. As a contrast to the generally over commercial music world, it is heartening to know that there is still room for some angry punk bands.