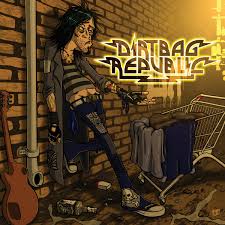 Dirtbag Republic are proud to declare that they have the idea to ‘put the sleaze back in rock n roll with zero shtick‘, a sentiment that we are more than happy to support. When they refer to influences including Hanoi Rocks, NY Dolls, Cheap Trick and Aerosmith, we know that we are either going to absolutely love them or be desperately disappointed! Thankfully, we were left far from disappointed!

From the moment we heard the opening track “Can You Feel It”, our first thought was that if you were interested in our review of the Michael Monroe album (see it hear https://thesoulofaclown.com/2015/10/27/michael-monroe-blackout-states/ then you will love this release. Songs like “I Don’t Believe” have that same mix of glam and punk (or glunk as we know it!) that Mr Monroe is the king of producing. They’re not throwaway songs but are played with passion and aggression but still retaining a sense of melody.

There are also easy comparisons to be made with the often derided Glam/Hair metal scene on songs like “I Have Nothing”, “Sky Is Falling” and “Leave The Lights On”. They are huge rock songs with great riffs, catchy melodies and excellent choruses. Now we acknowledge that this might not be cool and you won’t find any trendy hipsters listening to this whilst they eat their specialist crisp sandwiches! But that doesn’t bother us and we expect that Dirtbag Republic won’t care either. “Give Me A Taste” has one of the best glammy openings we have heard since the good old days of the brilliant Faster Pussycat.

“Socialize” even has us thinking of very early Manic Street Preachers, back when they used to worship Hanoi Rocks and Guns N Roses. They then reach a peak in terms of catchiness with the brilliant “Aloha Lover” and its chorus which is pure Cheap Trick.

We could write loads of words describing this album, but the most important point is that we just had great fun listening to it. Will it change the world of music? No. Will it bring back memories of fun times in rock clubs? Yes. Perhaps most importantly it will leave you wanting to have those good times again. Their sound may be based on bands which saw their glory days some time ago (commercially at least) but that doesn’t stop these tracks being great to listen to. If you’re a fan of the glam punk, glitter and gutter music style, this will be a welcome addition to your music collection.